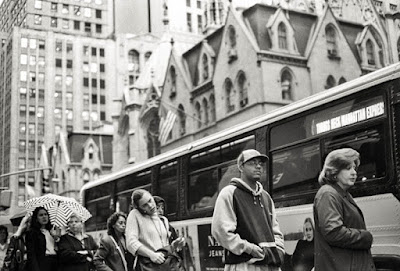 I've decided not to go to Miami in order to stay home and mope, so of course, the weather is not what was predicted.  There will most likely be plenty of time for shooting in the streets there this weekend.  Selavy.  That was predictable.

I shouldn't be anywhere around people right now, anyway.  They irritate the shit out of me.  In light of the new Puritanism, the righteous are cannibals eating their own.  You are either on board or shut the fuck up.  And that's the part I don't understand.  Why can't you argue?  When people piss me off, I don't get up from the table and leave, but that is what happened to me last night at a weeny roast for some of my friends at the factory.  I don't dislike people just because they have an opposing viewpoint.  I just want to be free to express my dissent.

So a plague on all their houses.  Their righteousness (on both sides) is troublesome.  No matter who, they are speaking only to their base.

These are deeply troubled times.

I want my blankee and a bottle of wine.  I'll lie upon the couch in a stoner haze for hours watching t.v.  And I'll eat whatever I want, things I have eschewed for years.  I may have a liverwurst sandwich with onions.  Maybe I'll fry up some bologna and put it on white bread.  Maybe I'll get some ruffled chips and swipe them through a creamy onion dip.  Peanut M&Ms.  I don't think I've eaten anything like that since the '70s.  Well, except for the M&Ms.

Can you imagine?  I almost get chubby thinking about it.

I've spent hours and hours scanning and post processing old negatives.  I've sent Q the ones that involve him.  He's posting those pictures in bunches (link), so I am almost devoid of things to use here again.  No matter, though.  They were of him and his girl, so they are his. . . sort of.  I really didn't think he would post them, though.  They are sure to bring him trouble.

O.K.  The factory calls as sure as shittin' as my father used to say.  I got a little drunk last night and slept in this morning.  It felt fine.  I haven't been to the gym for three days, and given my desire for bologna and chips. . . well, 'tis the season.