No Respect for the Aged 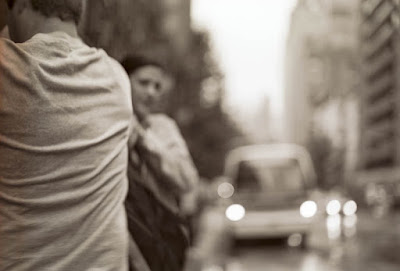 These are my friends C and Q back around the turn of the century on the rainy streets of NYC.  They were in their teens and twenties.  I hated Q but I loved his girl.  She wrote an email to me before I met her.  I thought Q had made it up.  It sounded just like him only more clever.  I wouldn't believe that he wasn't just jerking me around.  Then I met her.  She was much smarter than he and a whole lot better looking.  It is wrong to envy your friends for their girlfriends.  I think it might be one of the Ten Commandments.

Stupidly, when they broke up, I chose Q.  It was a redemption, of sorts, on my part, I think.  I've regretted that choice ever since, but loyalty is a good quality.  That's why we like dogs.

I have many pictures of the time I spent with them.  Q was working the night of the Ryan Adams concert, the now infamous one where he had his meltdown and effectively burned out his rising star.  Still, it was a wonderful concert, the last of his good stuff, in the newly renovated Beacon Theater.  C was going to meet me but never showed.  They should have been there.

But Q was off the next day and we had the weekend.  We went to museums and lunches.  It was a different NYC then, full of Cole Porter tunes no matter where you went, a late '90s hangover.  It was all about to change.  It was a new century--her century to anticipate.

I last saw her again some years ago.  She was in town to see relatives for Christmas and asked if she could stop by.  After Q forgave her and became her friend again, I felt free to keep somewhat in touch.  I hadn't seen her for around a decade, and I had just gone through a breakup and was feeling about as blue as. . . well, it seems I am always feeling that way.  We opened a bottle of wine and then went to a hip little restaurant for dinner.  By then, she had travelled the world quite a bit and was living in Europe, so I wanted to go someplace where I wouldn't look like a total rube.

That was the last time I saw her, and maybe the last I heard from her.  I was rather worn and beat by that time, I guess, not so interesting as I might have been.

No worries.  I still have Q.  And he her, I think.  They are still friends.  He was sending her the pictures that I was sending him last night.  He sent me a second person message from her, but I am not sure if I believe she said what he told me.  That's the way he treats me, however, even when I am digging up old memories and emotions for him.  He has no respect for the aged who have done so much to make him who he is.  I guess that is my only revenge!