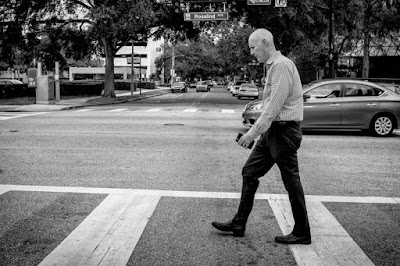 I've updated my Mac laptop as Apple has instructed me to do.  It is now the slowest machine on the planet.  Admitted, it is old, but something suddenly came over it so that it is not responsive.  No, that is not true.  It does respond.  Just not in real time.  It is like that man crossing the street.  Worse.  There are such lags between pressing a button and something happening that I must get a new computer.  I will not buy another Apple, though that is all I have ever had.  Apple computers used to be the good choice, the easy, creative tool.  Now it is the buyer who is the tool.  Apple has spent its Cook Time figuring out how to screw people.  Siri is Alexa's special cousin now, a slow dimwit.  Samsung phones have better cameras.

I am lucky to get any post up today.  I couldn't even get the Times to load completely.  I feel incomplete.

Are Trump's days numbered?  Do you believe that they are?  I have lost hope.  Only Melania can bring him down now.  If she were to divorce him and take the child, all sorts of records would be released.

I'll admit, I looked up Stormy Daniels' pictures.  Ugh.  Trump is something else.

But at least we got rid of Al Franken.  At least that.

I watched Letterman interview Obama on his new Netflix series.  Letterman was very disappointing. With that beard, he looks like a cutout.  Obama, on the other hand, was way worth watching.  The most loved and hated president in history.  Letterman is a guy who had very few black folk on his show, who catered to a white audience, who cheated on his longtime girlfriend, and now wants everyone to believe something else.  I want to see who else he invites on his show.  He used to seem cool, but he is making a mistake now.  His apology act is revealing what he always was.  He should have left it alone.