I Know about the Blog 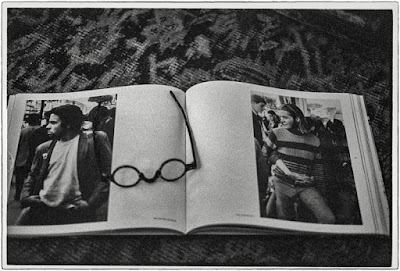 Look.  I know my blog sucks right now.  The photos suck, the writing sucks.  I am not stupid, just egomaniacal.  Truly. . . I know this.  But I don't have any support for what I want to do now.  What I want to do is walk the streets and talk to people and take pictures and make stories.  But that is not what I am supposed to do.  Right now.  And I'm getting old.  I know that, too, and it is true.  I don't have the same access I used to have.  Who wants old people around?  Right?  So. . . I am struggling.

I don't know if it will get any better.  It might.  There are factors.  I mean, I love this photograph and would let it represent for me anywhere.  It is film, and I took art just the other day.  And maybe I need to figure this out.  I mean what I photograph.  I could still do street, though I might get my teeth knocked out.  But I don't have the time or support for that.  I don't have a studio, to those photos are out of the question.  And again, the things I want to do. . . well, I just don't have the support.  If it were just me, I would do things that even you, my friends, would run away from.  When the world turns the way it has, then it is time to portray the weird.  Fascist times call for strange art.  On my own, that is what I would and could give.  But I have to look toward the future, just like many of you who do not have to face or admit it.  The future is coming on full throttle, and it ain't pretty.

But I have a job and fair insurance for which I don't have to pay.  What do others do?  Fuck me in the aortal cavity. . . or whatever.  Some days I think I am just ready to die and get out of it.  But then, I don't.  I mean, I still have a very good life.  Comparatively.

I am a rough guy in some ways, but the roughness is fading.  Still, I love me a cowboy.  I don't mind a cracker or a redneck.  There is more good in most of them than bad.  And who doesn't love a cowgirl at the beach in a bikini and cowboy boots driving an F-150 with a surfboard in the back, blasting country music?  I sure do.  Cowboys are cool, I think, compared to us who don't have to do what they do.  Bust their ass, I mean.  And for the most part, because I am respectful in my ways, they don't beat me up.  They even listen to me sometimes.

Now those asshole dime store cowboys and front porch crackers are another thing.  They sick the dogs on black folk who just want to vote, and I will fight them (and get my ass kicked) any time or anywhere they stand for cracker evil.  But there aren't as many of them as you might think.

Especially where I live.

I wrote that last night, and it is a good thing, for I have no time for writing this morning.  I slept in far too late.  A good thing?  Maybe.