Remembering a Story at the Last Minute 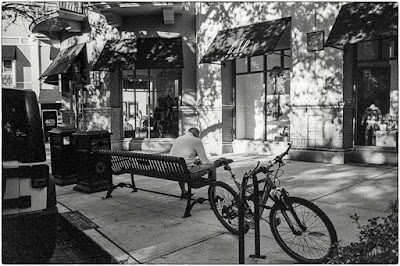 I always have something to write about until it is time to write something recently.  When you don't have anything to say, don't say anything.  That's the advice I would give, anyway. 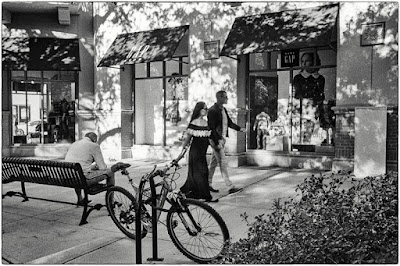 This is a series of pictures I took in a few seconds the day I pulled my camera bag out of the basket on my Vespa and all the Leicas fell hard to the ground.  I picked them up and just went through the mechanics to make sure they worked.  This was the little Leica CL film camera.  Fortunately, Leicas are built pretty tough, and film cameras will take a much bigger beating than a digital camera can. 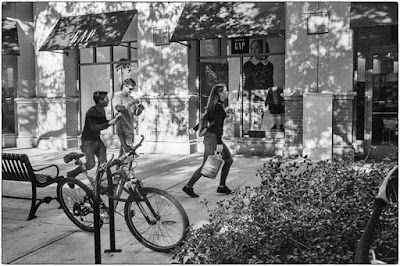 I have taken to putting the developed film in the scanner, twelve frames at a time, and giving them all the same setting for capture, hitting the button, and walking away.  I do this since I don't have proof sheets when I develop at home.  I'll look quickly at what I have later.  I haven't looked at these since I scanned them and they are a complete mystery to me.  I like the shadows and the light there.  Nothing in the first frame, something in the second, then a kind of mystery in the third where it seems the boy is running after the girl.  I like the surprises that film can bring.

Yesterday I was speeding more than usual on my way to the factory.  Driving here has become impossible and I am impossibly impatient.  Coming down an overpass at many, many miles per hour over the regulated limit, I saw a black and white police car belonging to the very city through which I was passing.  There are many, many little cities piled together on this stretch of very commercial road, and I must be aware all the time.  When I saw him, I knew he saw me as well, and I began pumping my brakes in the most inconspicuous way that I could to take speed off without being obvious, cursing my self all the while with a series of "shit, fuck, piss, shit, fuck. . . ."  You know, the speeders prayer.  Well now, when I passed the black and white, I glance in my rearview mirror and saw him pulling out.  O.K., I thought, I am guilty, so I got over into the right hand lane to make it easier to pull over when he came up behind me.  At this point, I was driving behind the slowest moving traffic, not speeding at all, slower than slow, and he was trying to reach me through the mass of ever slowing drivers as they became aware of his old black and white.  I got to a red light and thought about turning as he could never make it over in time, but I thought again and had already decided that I was going to plead mea culpa and see.  In another quarter mile or so, he was able to get into the lane behind me.  He came charging up like a madman, but I wasn't looking in the rearview mirror directly now knowing it would be awful to make eye contact.  Out of the corner of my eye, though, I saw him riding me and swerving like a hop-head on speed, probably trying to rub one out just a little, his testosterone levels spiking, his adrenaline pumping.  Just a little rub, just a tiny squeeze.  Watching him now, I was sure I had made a mistake, that I should have taken that right at the light, that this guy was not going to be taken in by any mea culpas.  I pictured the veins in his neck as he clenched his jaws chewing on some imagined piece of meat, pecs flexing, hands quivering.  But I didn't look in the mirror and kept to the right lane waiting for the flashing lights.  A half mile.  A mile.  Nothing.  And when I looked, he was gone.

I did it!  He must not have gotten a good reading on my speed.  He could look and see that I was, but maybe he didn't get his radar up in time.  He was surely calling in my tag number.  I was sure of that and I was glad for no outstanding warrants at the time.  And when I turned up clean as a bean. . . .

I will drive more carefully today.  And probably for a few more days after that.  Surely, I will.  Surely.
Posted by cafe selavy at 9:45 AM