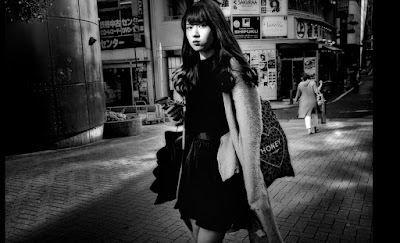 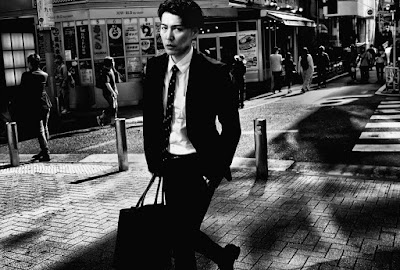 Here are two photos by a photographer who has been shooting for awhile.  He is one of my favorite street photographers.  You have to have given up on everything else, I think, to shoot this way.  You have to simply become this thing.

He uses two fairly inexpensive cameras to do his work, a Ricoh GR and a Fujifilm X100.  Often, he uses flash.  To get that close to a stranger and let off the flash is really the other side of crazy.  Bruce Gilden does it in a very aggressive way.  So does Mark Cohen.  The difference with Tatsuo Suzuki (link), however, is that his subjects are often very stylish and very pretty.  Maybe to a flaw.

Yesterday, I received a book I had ordered by Mark Cohen.  Here are links to a couple videos about him (link) (link).  I saw his work for the first time when I was taking photography classes in college in the mid '70s.  The pictures struck me hard, and for awhile, I used flash in my photography to great benefit, but the pictures I took were always with people I knew.  His working that way on the streets of a northeastern working class neighborhood seems crazy.  I've never heard him talk about being beaten, but I have to think it must have happened.  Much of his work centers on adolescents and he openly talks about the sensuality of that.  He is lucky that he escaped lynching.  Thank God he did, though, for the results are more precious than mere innocence.  I can only speak for myself, but I think conventional morality must be sacrificed in the interest of art.

Perhaps that is why I never appreciated the Abstract Expressionists the way I should.

But, even Norman Rockwell was a little bit pervy.  And I love the art of the Catholic Church.  They are usually willing to excuse most anything.  The Mormons, on the other hand. . . well, there is no great Mormon art as far as I know.  I grew up in that religion, and all I recall is that schlocky poster art that bordered on cartoon-ism.  They eschewed pomp and circumstance and all forms of intellectualism as far as I know.  But the Catholics--well, they gave us Caravaggio, didn't they?

I won't be watching the Golden Globes tonight, I think.  Maybe I'll have to, the way I watch the news because of Donald "The Genius" Trump, but I don't want to.  I'm glad they are going to all wear black.  It is appropriate, I think.  I may watch, however, just to see if anyone has the gall to wear red.  I would chip in to a Kickstarter for that.  It is not that I am against equality and safe passage.  Indeed, my protests and marches have all been for that.  It is ideology that kicks my ass, that and the feeling of religion that revolutions always bring.  Besides, I appreciate outsiders and rebels.

To wit, I watched a documentary on Gilbert Godfrey last night.  Holy shit!  I can't say it is a great documentary and that you should watch it, but there are some real surprises in it.  The biggest one to me was how beautiful and loving his two children are.  It will reify your belief in weirdness.  Godfrey is about as far outside the main as a person, especially one who makes a living off the establishment, can get.  And I've always loved watching him.  I'm sure, if he were on the red carpet tonight, he would not be wearing black. 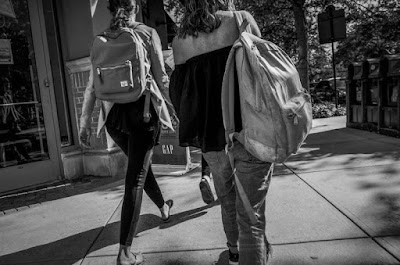