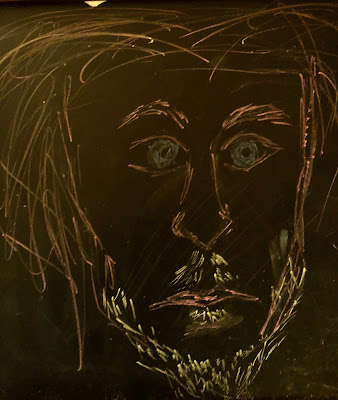 Ili drew my portrait in chalk last night.  It is a perfect rendering.  Savage.  If I could draw so well, I might return the favor.  The thing about the chalk board is the impermanence of the work.  I, however, clever boy that I am, have remedied that.  Each scrawl can become an enduring work of art.

I stopped for a beer with some people from the factory after work yesterday.  I spent most of my time talking to my old college roommate.  Memories fading, we struggled to recall names and incidents, but eventually, out of the misty past, our lips and tongues would form sounds, then words.

Bob was a sharpshooter who played on our basketball team.  He had played college ball at Oral Roberts.  What an anomaly, really, since we were a radical crew of heathen hippies.  But we made it all the way to the finals before being beaten by the champion AAU team.  We lost by four.  Fortunately for us that night, their seven foot center, Rusty Clark, who had played in the NCAA championship game against UCLA and Lew Alcindor, couldn't make it.  He was finishing up his internship in medical school and was on call that night.

Giant tales of daring and adventure.

We have to tell them to one another.  Nobody else believes us or cares.  Who can blame them?  I've learned the internal voice of other people.

Artless, whining fuckers.  They've lived like peons and want to be heroes.  Right?

Q and I were texting yesterday as we often do.  I wrote that, "We hold these truths to be self-evident," was a lousy way to begin an argument.  That started me thinking about the founding fathers.  In reality, they were a bunch of developers who were influenced by the language of the Bible.  They lived among some really stupid people, so they decided that while all men were created equal, some should be allowed to vote.  They tried to limit that to educated land owners.  Can you imagine not wanting to allow Apple Jack Bob's retarded brother to vote?  I mean, you could end up with somebody like Trump as president.  Right?

Isn't it funny, though, that we've elected an Ivy League educated developer who holds many truths to be self-evident as president?