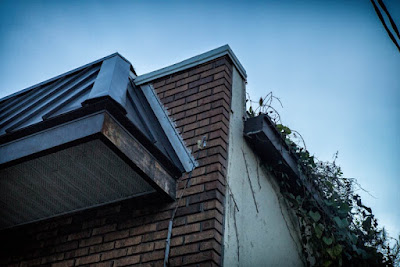 I didn't "lie," but I wasn't able to follow through.  I ended up watching the Super Bowl.  Most of it.  Three quarters.  I mean, I even sat through that hideous halftime show.  WTF was that?  But just as the 4th quarter began, the cable went out.  I thought I had done it as I was dancing around the house, bobbing and weaving, and I thought I might have stepped on the cable line and pulled it out or something.  But having said I would not watch it, I felt like there was some kind of karma involved, and so without much regret, I went to bed.  I wondered who would win, of course, if the charmed underdogs could hold on to victory or if Incredible Brady could pull off one more.

I got more sleep than you did if your cable didn't go out.  That is the only upside, I guess.

I am going to cancel my cable this week.

The picture, if you can believe it, is of the 7-11 net to the Cafe Strange.  This is what I do with the Leica and a 50mm lens.  I went out for a little while with the camera yesterday.  Ili didn't want to go out, so I started moving cameras around from one bag to the other deciding what to take.  I almost took a Sony, but at the last minute, I went back to the Leica which I had said I would dedicate myself to.  And I was glad.  Since I was walking around in a crowd, I put on a 28mm lens, prefocussed it to six feet, shut the aperture down to f11, and just clicked the whispering shutter.  It works.  There is no lag, no motor trying to find focus.  Just the almost silent "click."  And walking around with the Leica in my hand just felt good.  I get it now, the way the old photographers shot.  And I learned some other lessons, too.

When I got home and downloaded the images, there wasn't anything interesting, and I was disappointed, of course.  But it wasn't a technical failure.  The pictures just weren't interesting.  Except for a few. . . almost.  I started bringing the camera to my eye from time to time.  I felt comfortable.  I have ideas.

The workweek begins, and for me, it will be brutal.  No, not brutal, just irritating.  I have put too many things off and have more work to do than I would like.  I promise myself not to put things off any more, but you know how that goes.  I will take some time off soon.  That is all I want, time off and some freedom from anxiety.  All I can guarantee is some time off. 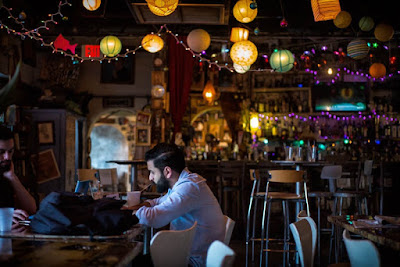