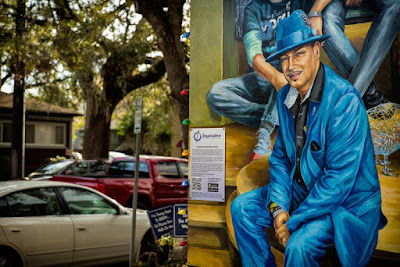 Today is Super Bowl Sunday.  It is likely to be memorable for me as the first one I haven't watched.  That is another thing that I have lost all interest in.  I don't care who wins or who the halftime entertainment is.  I know both things because I read the papers, but I don't care.  I might if it weren't so hyped, so commercial, if people weren't making so much money from it.  Maybe if it were a bunch of guys duking it out in the mud or on a frozen turf, but not in February.  People shouldn't be playing football in February.

But people will watch them some washed up pop stars at halftime and talk about whether they did a good job or not at the water cooler tomorrow.  I mean over bottled water.  What was I thinking?

I am taking pictures, but I haven't had the breakthrough yet.  Maybe I won't.  That is another thing that has come to haunt me.  It is more difficult to lie to myself that way.  And that is a terrible thing.  If you don't think so, read/watch "The Iceman Cometh."  Strip a person of his/her illusions and see what happens.  Illusions and Dreams.  They are what we are.  They are what we have.

That and bacteria.  By far, most of what you consider to be "you" are other organisms.  And as I have been saying since the beginning of time, they are what determine your health, both mental and physical.  Gut bacteria are the new players right now.  If you have two kinds species of bacteria living in your gut at the same time, you are really likely to get colon cancer.  There is another type of bacteria that lives in the gut of fat people.  People don't just get to be six times the size of the rest of us by eating.  I am certain that mental illness is caused by another combination of organisms that change the chemistry of the brain.

And I am certain that aging is associated with something like this, too.  It is the breaking down of the immune system that lets them take hold.  The little fuckers are killing us.

But hey--it's nature's way.  The cycle of life and all that.

I've stopped reading most political news, but I like some special interest things.  I've been reading about the Natalie Wood case.  Seems that she was "having an affair" with Christopher Walken on the boat that night.  At least that is what the National Enquirer thinks.  And when Robert Wagner caught them, Walken was too big and weird to kill, so he drowned Wood.  And that is why Walken is the way he is.  At least according to the National Enquirer.  Sort of.  I only read the headline in the grocery store checkout line.  I extrapolated the rest.  But it seems the only explanation to this centuries old mystery.

And that is how I will spend the remainder of my life--figuring out the ancient mysteries.  I've been right about the bacterial thing, so you should trust me on the rest.  Those of you who have "the wisdom," anyway.
Posted by cafe selavy at 7:09 AM