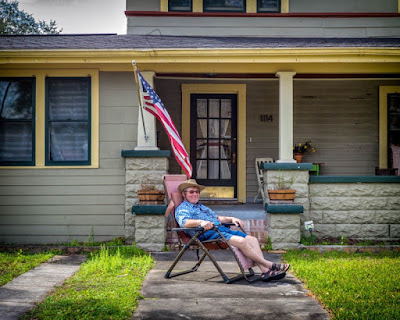 He was from Philly, he said.  He and his wife come down every year to spend a couple months with their daughter.  That day, it was twelve below with the wind chill factor.  I have to take the picture, I said.  It was just too good.

Me, too.  Saturday was a spa day for me at a place on the coast.  Eighty minute massage followed by an eighty minute facial.  Pampered, I was.  When they were finished with me, I met up with Ili and had a drink.  We hadn't eaten and were both starved, so we went to the restaurant for an early dinner.  I mean early.  We were the first ones there.  The waitress brought us menus, then a bottle of wine.  I didn't look at the menu.  I was in some sort of coma--a stupor, if you will.  When the waitress came back, and she was a nice young lady, she asked us some questions.

"I don't know," I said.  "I can't even read the menu.  I've been upstairs getting worked over for the last three hours.  I can't move.  She's going to have to feed me.  We're just going to eat and go back to the room and have some whiskey and watch 'I, Tonya.'"

The waitress had a frozen smile.  Ili looked horrified.

A real stupor.  I remember watching the Olympics later that night and landing a sloppy double axel with the whiskey bottle in my hand.

Eldercare hasn't been all bad so far.  In the morning we had a perfect breakfast overlooking the ocean.  A pitcher of mimosas, an omelet, gravlax, bagels, cream cheese. . . .

Now it is over and it is time to train like an Olympian.  That's the idea, anyway.  Maybe I'll try some gentle stretching. 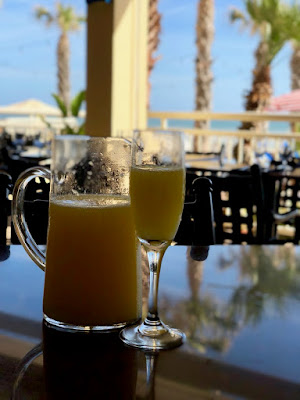