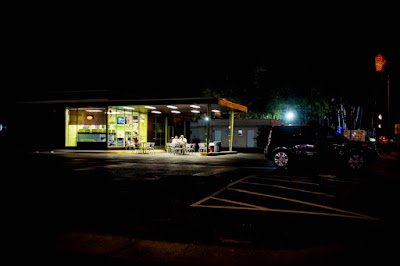 These sort of places fascinate me.  We were driving back from a wedding in a distant town and passed this ice cream shop.  I had a camera.  I turned around.  It is the thing I should always do and the thing I rarely do.  Modern life, I guess.  Always on a beeline to somewhere.  I parked in the lot and picked up my camera and went to the front and tried to shoot quickly.  We were in Redneckville and people were looking at me in a funny way.  I snapped two photos and went back to the car.  I could feel eyes poking me in the back.  Back at the car, however, I found that I had pulled out the Leica Monochrom instead of the M262, meaning I had just taken black and white pictures.  I told Ili.  She glibly told me to go back and do it again.  "I can't," I said.  "Those people don't like it."  "Oh, they don't care.  Go back and take the picture again."  So I did.

The picture could be much better.  It would be better if there were not cars in the parking lot.  The thing would just float in an emptiness as the light fell off.  Still, I feel a "Nighthawks at the Diner" quality in it.  O.K.  Grandiose.

Winter ends this week.  Tomorrow.  It will be spring with the water beginning to flow and the sap starting to rise.  Soon there will be love in the air.  Or pollen.  We, here, have been inundated by it.  Even people without allergies are complaining.  Each morning, the cars are covered in it.

Ili is anxious about the garden.  It is not growing quick enough for her.  Only a few of the seeds have begun to sprout.  None of the garlic bulbs nor the potatoes.  No onions.  I keep telling her they will come, but she doesn't believe it.

If you were of age in the late sixties or early seventies, you remember gardens.  Everyone was going natural.  It was like living in Middle Earth.  Communes and farms and earth shoes and stoneware and hairy underarms and legs and beards and bushes.  I had a garden and earth shoes and all the accoutrements.  I am sure the garden will grow.  But that was a long time ago and while I was tilling the soil and protesting polluters, people like Trump were buying and selling and making the future what it has become.  What happened to all the Middle Earthers?

Oh, well.  It was a fantastical idea that people wanted to be self-sufficient and self-sustaining.  It was ridiculous to think that everyone wanted to go back and live in the forest.

In just a few years, it had all given way to disco.  What can you do?  Even the seasons are not the same as they were.  We will see.  Will love still bloom?  Surely.  There is enough pollen.
Posted by cafe selavy at 8:04 AM