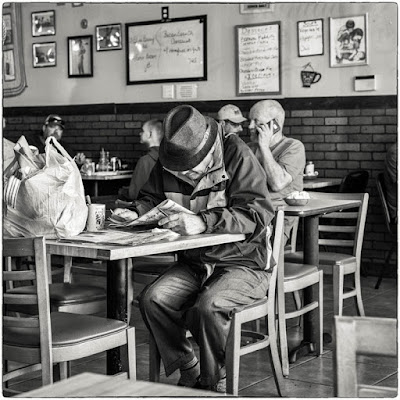 Breakfast in a Grit City diner.  What isn't in the photo is the picture of Elvis on the wall.  Should have thought about that.

People say "experiences, not things."  You know what I mean.  People try to buy happiness, I guess.  That won't work, but experiences are no guarantee, either.  There are some pretty rough experiences out there.  And I do like things.  Yesterday I think I had an interesting look.  Nothing special, just the way I like to look.  Black t-shirt, white Oxford, jeans, a beautiful Ona canvas bag, a Leica, and some big, expensive sunglasses.  I was on the boulevard, and as I was climbing on my Vespa, two boys in a slowly passing car shouted out, said love, and gave me two thumbs up.  I think I looked like something out of an old Italian movie.  It wasn't me, exactly, just the things I'd chosen. And none of it was expensive, I should say, but all bought at bargain basement prices.  I just know what I want, and the things I carry shape my experiences.  You see?  They go hand in hand.  Everything I buy, from the  art on the walls to the books on my shelves and the 19th century nomadic tribal rug on the floor--all of it, is to shape the way I experience the world.

Yea, I'm a prick.  But most of the time, I'm happy.  And I have experiences.  Lots of them.  More than my share, I think, though not so many recently.  It is that I hope to remedy.  Soon.

Still, things define us.  We are "thing" makers.  Many of the things we make are shit.  Most of them.  But there are some things that are so beautiful they make you ache.  Not so many, but enough.

My family were settlers.  No, they didn't settle the land.  They settled for what they got.  Easter, for instance.  I hate it.  It is a bad memory of cheap, waxy chocolates and overly sugared candies and gaudy plastic eggs.  It was so bad, it hurt.

Maybe one nice piece of good chocolate would have done it.  Maybe just that.  Or a nice pair of shoes.

I'm not complaining about my family, but that was an experience that surely shaped me.  Things, no matter what, define us, whether we live in a mansion or a dormitory or a commune.  A hippie with a nose ring is proud.

Anyway, Wallace Stevens says it better in "Anecdote of a Jar."

I placed a jar in Tennessee,
And round it was, upon a hill.
It made the slovenly wilderness
Surround that hill.

The wilderness rose up to it,
And sprawled around, no longer wild.
The jar was round upon the ground
And tall and of a port in air.

It took dominion everywhere.
The jar was gray and bare.
It did not give of bird or bush,
Like nothing else in Tennessee.
Posted by cafe selavy at 7:41 AM