Objects in the Age of Selfies

There are more cameras and more photographs than ever, but it is now almost forbidden to photograph people.  We have become too image-conscious and are our own publicists now.  I've made the mistake of trying to photograph in the streets of my own hometown and have suffered for it.  Unless you just want to be the town weirdo, I suggest that you don't even try it.  But I shouldn't judge.  Maybe it is just me.  I can walk through a crowd where half the people have cameras slung over their shoulders or in hand, but I will be scowled at and viewed with suspicion.  I don't get it.  I really don't.

So. . . in the Age of Selfies, I've decided to photograph objects.  I noticed that on almost every third lawn in my neighborhood, there is some sort of electrical box or water pipe or something I haven't a name for.  These are things I don't normally "see," things that are just invisible in some way.  Once I began noticing them though, I couldn't quit seeing them.  The other day, I took my camera and my scooter and would stop and photograph them ever few blocks.

Oh--and people looked at me with suspicion.  Yup.  It seems no matter what I photograph. . . . 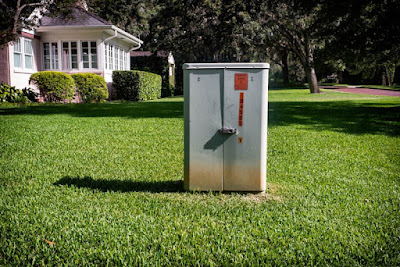 This box sits in the lawn of a house worth well over a million dollars.  Probably two.  It is a beautiful house on a gorgeous brick street just across from a lake.  The box is shabby and sun-beat, bent, crooked and ugly.  Maybe ugly.  As I began my project, the boxes and pipes began to take on their own personalities.  As I photographed, I began to move closer and to use a more wide-angle perspective, filling the frame with the object while placing them in the environment at the same time. "This," I thought, "has legs."

You'll see more in time.  At least until I get the chutzpah to photograph people again.

I've been living at my mother's for five weeks now.  The girl is gone, so there is little but reading and watching television after dinner with my mother.  And early bed.  It is a monkish life, really.  Yesterday, I went to the doctor to get the results of my lab tests.  This is my first doctor and my first "let's sit down and talk about your health" session ever.  I have not lived a careful life, so I was very, very anxious.  I had made up my mind that if the news was bad, as it most certainly would have to be, I would walk out of the office and never go to another one again.  Seems, however, that I am pretty healthy.  Very, actually, at least according to the data points.  So, if I am so healthy, why do I feel so bad?

I've been trying to reward myself.  Of course.  I made a deal to buy someone's Leica M10 for a good price.  But payment became an issue.  I sent money by PayPal, but he didn't like the fees.  I tried Zelle, but it wouldn't let me send that much money at one time.  Then, last night, he decided to keep the camera.  I was relieved in some ways as I was going to have to sell a lot of things to make up the money.  After the relief, however, came the disappointment.  I really wanted that camera.  Financially, of course, I am better off.  So why do I feel so bad?

It is a sunny Saturday morning, but it won't last long.  The light is calling me, and if I can move, I should respond.  I haven't gotten the lab results back on my psyche, so I don't know if I have a healthy noggin or not.  What I know, though, is that I must do something.  There is still a life in here and there is still a world out there.  Let's mix 'em up and see what happens.
Posted by cafe selavy at 8:31 AM