Convicted By My Own Confession 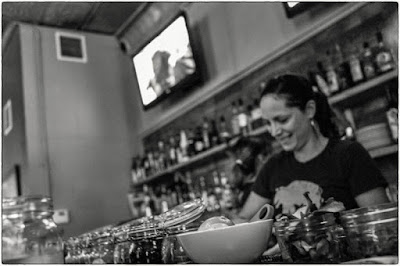 Maybe I'm not supposed to take pictures anymore.  No matter what I try, I get into trouble.  Yesterday it was pretty much that I had a camera in public.  Hardly public.  I was one block from the photo store.  I'd gone in to buy some strap rings for my Leica Monochrom.  I had a 21mm lens on it and a flash, and I was experimenting with it outside the store just trying out exposures.  I walked down the block and took a picture of some garbage lying on the ground.  I looked up and a shirtless fellow wearing fatigues and carrying a military backpack was throwing a shitty look my way.  He was obviously homeless, sweaty-greasy and dirty, but he was jacked like he was on 'roids.  I've always been amazed at how hardy a lot of homeless men are.  This is, by far, not the first or only time I've been confronted by one, and each time I think to myself, "This isn't right.  I eat well and work out, and this guy sleeps under a bridge and eats shit.  He should be afraid of me."  But they aren't.  I watched one homeless guy get aggressive with a neo-nazi power lifter in front of my old steroid gym one day.  He stepped up into the fellow's face.  The neo-nazi hit him right in the jaw.  This fellow could hit like a ton of bricks, too.  I'd seen him on the heavy bag.  But the homeless fellow, who didn't look like much at all, didn't go down.  He didn't even show a hint that he'd been hit.  He simply looked at the neo-nazi with the swastika tattoos on his neck and said, "I've been hit harder than that before."  Then he walked away.  I think it was Q who said to me, when I spoke of these things, that these guys are genetically different than we are, tougher, built to survive.  And I realized he was right.  They are like the 500 fellows who Cortes took with him to conquer Mexico.  Try to imagine what that was like.

Anyway, I walked on down the block looking for something else to photograph, and when I got to the corner, the fellow turned and started threatening me.  He was Asian, or partly so, and I could barely understand him, his missing front two top and bottom teeth maybe a contributing factor.  I just looked at him.  Now this is the part where it went wrong.  Rather than smiling and waving and going on about things, I looked at him and said, "What?"  He kept talking about my camera and got himself really worked up.  Or maybe I did when I said, "Fuck you, I'll take pictures wherever I want."  What did I think?  That I was going to win this argument?  That he was going to say, "Oh."?  So now, I was in the shit.  He was talking smack and I was thinking.  That was the difference, I believe.  I was doing an inventory.  He was half my age.  If we came to blows, it was going to hurt me more than him.  I wondered if he had been trained in hand to hand combat.  Surely he'd had his front teeth knocked out.  He was completely batshit crazy and I was sure of a low I.Q.  Even though I was living with my mother, my life was about 10,000 times better than his.  Why was I standing on a public street jawing with this whacko?  He must have seen it in me, this uncertainty.  We are like animals that way.  A moment of doubt.  I had regrets.  I'd gone pussy.  I was ashamed.  So I made my decision.  It wasn't a rational one.  It was a stupid one, the kind that guys suffer for all the time.  Whatever little bit of testosterone that still boils in my veins was activated.

Now I have forgotten to mention that I had my largest camera bag, a big thing, holding three Leica's and a number of Leica lenses.  I thought about that, too, in my moment of consideration.  But now I sat it on the ground and put the camera I was holding in my hand inside.  I turned and faced the maniac, spread my arms and said, "O.K.  What the fuck you want to do?"

And that was the end of that.  He said something about the camera, turned and walked away.

And I felt stupid.  Ashamed and stupid.

What is wrong with me?

But I was done for the day.  I didn't want to take pictures any longer.

I got on my scooter and headed for a drink.  I didn't want to sit with the freaks at the Cafe Strange now, so I headed to the upscale cocktail bar where I used to spend too much of my money.  I wanted an Old Fashioned and a little luxury.  And that's just the way it is.  I have that.  It is hot and unnaturally humid here, and walking around a city street with your possessions in your pack looking for a place to rest. . . well, that was not me, and I was glad.

I have to learn to have a sense of humor.  But I don't.  Sitting at the cocktail bar, a group of young men, frat boy types, were being loud and stupid.  Their laughter and self-assured smugness. . . well, I wasn't enjoying my drink.  I wanted to. . . .

Rather, I had just the one and called for the check.

I told Q yesterday that other people's happiness may oppress me.  He quickly agreed.  I think I may criticize him most for the things he likes the best.  I'm sure I do it on purpose.  It is just part of my charm.

Yesterday was Hemingway's birthday.  He was a fucker, too.  I've probably been attracted to all the wrong types.  Ghandi was never my thing.

I tell you all this in the strictest of confidence, of course.  My confessions are not to leave this room.  There is nothing worse than being convicted by your own confession.  Pinky swear?
Posted by cafe selavy at 8:16 AM