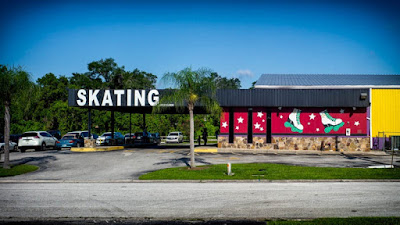 They didn't like me being around here with a camera, either.  I want to shoot roller skaters, but the reality of it is going to be harder than I thought.  Everything is.  I have to leave this country if I want to photograph anything.  There are far too many rules now.  Paranoia and Entitlement are the pillars of our society.  And everyone is an action hero.

But nobody enjoys a complainer.  The blog is better when I have a story to tell.  If I could tell you that a grandmother came out and threw punches at me and smashed my camera. . . now THAT would be a tale.  But she didn't.  She only threw a little shade and stared me down.  I was too far from her for the punches to even come close.


I have two more photo books and another camera being delivered to the house today.  I have looked at too many photographs.  I see them everywhere and my bones ache for not being able to take them. I tell myself I will again, I will be able.  But I am beginning to seriously doubt it.  If I were a nine year old girl, yea, maybe I'd be able to take all the pictures I wanted.  But times are changing and so am I.  When I catch a glimpse of myself in the mirror, I want to throw rocks at me, too.  There is no room for the aging in this world.  There are not enough resources to support us all.  Old people are a drag.

Shit.  That isn't a story.  That is just complaining.  Let me try again.

Yesterday, I rode my scooter early before the rains.  I took my cameras and stopped once to take a picture of people meditating in the park, a big group of maybe 75 people.  It didn't work out.  Just as I got set, it was over and everyone began moving, getting their things, standing up.  I put my camera back in the bag and got back on my scooter and rode on.  In a vacant lot downtown, I saw a woman talking on her cell and smoking a cigarette.  I wanted to pull over and photograph her just the way she was.  But I couldn't make myself do it.  I am not immune to the New Paranoia.  I decided I was wasting my time and would be better off drinking, so I drove to the Cafe Strange.  It was packed.  The kids in front of me in line looked like they had had a big night and had gotten out of bed without showering or brushing their teeth.  The boys wore man buns, and the back of their necks reminded me of picking up our dates for prom.  Never had they worn their hair like that before, but somehow it was mandatory that they all go to the hair salon and get the same B-52.  All those pale, sinewy necks were scary, but we still gave them the corsage and took them to the dance.  These boys looked worse, though, in their skinny jeans and heel-less boots.  The girl in front of me wore platform combat boots with mustard knee socks and a short, printed dress.  She moved her head slowly.  Her eyes were puffy.  Her skin a sickly pale.  Her friend wore very crisp cutoff indigo jeans and a tank top.  I ended up at the table in front of them and heard them talk of poetry.  The sallow girl said she wrote in free verse.  One of the boys said he had to write in meter.  He had written poetry in school.  The girl said she just listened to the voice of the persona speaking.  Sometimes, she said, there might be a rhythm.  He said he needed, you know, like alliteration and rime.  She said she had a writing teacher who would write a poem and then write it over again a hundred times until E-V-E-R-Y L-E-T-T-E-R had a meaning.  That is how she wanted to write, with that much attention.

I got another drink.  After that, I was sleepy and went back to my house and took a nap.  I was woken later by thunder.  I waited it out, then took my mother to Costco.  It was horribly full of slovenly, unpoetic people.  Or so it seemed to me.  I wouldn't even have wanted to photograph them.

Back at my mother's, I cooked a spaghetti dinner.  It was early when we finished.  There was nothing to do but watch three hours of t.v.

We started with Anthony Bourdain.
Posted by cafe selavy at 8:21 AM