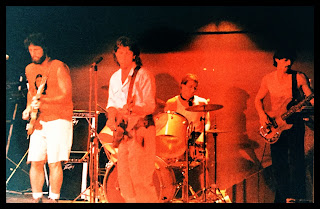 Late in the afternoon, I asked my mother if she could remember any 4th of Julys from the past.  She said she couldn't.

"I don't know if they even celebrated it out where I lived as a kid."

Later, as the first popping of fireworks from locals began, the local news station was reporting on the crowd of 100,000 people expected to attend the celebration downtown in the park surrounding the city's featured lake.  I called out to my mother,

"Remember the time my band played there?

I don't know how we got booked for that gig.  We were the only entertainment before the fireworks.  We shouldn't have been playing it.  We were a political band who wrote songs of anarchy.  Maybe we played some country that night.  I don't know.  We did that sometimes.  But the crowd was 100,000 that night.  Take that Mick Jagger!

A friend of mine posted this today.

It is crazy to me how much Lady Liberty's face looks like Donald Trump.  Put some orange hair on that and a big pot belly covered with an expensive suit and see.  I don't know, man, things are getting weirder.