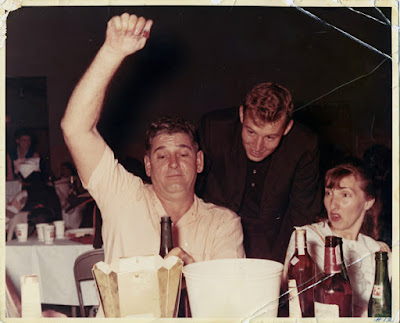 I had a bit of a break-through yesterday. . . maybe.  I got up and almost went to work.  I felt like the day was just going to be a rehash of the past, a waste of time, and wondered why I would want to sacrifice a day of leave for that.  But I couldn't make myself go.  Nothing in life appealed to me, but nothing in life appealed to me less than going to work.  I did the "usual" thing, went for a long walk, went to the gym (Jesus, the telling of it sickens me), then came back to my mother's to shower.  She was sitting in the garage when I got there.  Her sprinkler system wasn't working right and she has a lawn care service who tried to replace the timer but couldn't get the new one to work so they put the old one back on--which didn't work in the first place.  The repair guy had just left.  They don't know what they are doing, she said.  I went back to look at it.  It is old, but I told her I would Google it and see what I could find.  That didn't cheer her.  She wanted me to put a new game on her phone, but I couldn't because she can't remember her account password.  I tried every password she told me, but none of them worked.  I tried to recover the password, but I needed another password that she didn't know to do that.  I was growing peevish and decided to go to my house to shower.  I was not liking myself and my growing impatience, and I didn't want to act like more of an asshole than my tone was already indicating.  I have a lot going on in my shaded psyche right now.  I decided to bail.  I got my stuff and went to my house to shower.

After showering, I grabbed my Hasselblad in which I have a new and temporary interest.  It would rain in a bit, but I believed I had time, so I grabbed my scooter and blew.  I took the quickest route which was on the busiest highway, and I felt the trouble I had was distracting me.  I wasn't paying attention, wasn't noticing the environment.  I'd "come to" and think, "You'd better watch out.  You are about to make a mistake."  The darkening skies, my brooding mood, my month's long exile from the outside world all, I believed, were conspiring against me.

When I parked my bike, I looked through the big plate glass windows of the dance studio next to the photo store.  Chubby young teens were practicing awkwardly in the wall-long mirror.  A couple of them saw me and giggled to one another.  I wondered.  I slung my camera bag over my shoulder and hurried into the store where I was greeted by two younger photographers who worked there.  I have always had some kind of reputation there, one, I hoped, that was enviable.  I needed an attachment for my tripod that would allow me to mount the big Hassie.  The woman who helped me find it was Hispanic.  "Quanto es?" I queried.  Oh, shit.  Why?  I hadn't meant to ask in Spanish, but she found it amusing and answered back with a smile.  In Spanish.  I wasn't quite sure what amount the words added up to, so I pulled some bills out of my wallet that I thought would cover it.  She handed me the change and said "Luego amigo."  Everyone said goodbye when I left.

O.K.  They hadn't frowned or spat in my direction.  Maybe things hadn't changed that much.  I was feeling better.

I was hungry, having eaten only a small yogurt after the gym.  I had a decision to make.  I thought that sushi sounded good.  I hadn't had any for a long, long time, and though I don't usually have it for lunch, I had the opportunity, and it was sounding good.  But in the east, a dark bank of clouds was rolling in.  Rain?  Maybe I could make it to the sushi place before it hit.  I'd start riding and decide.  In a few minutes, though, my mind was clear.  Get the car.  I was happy.  The air was cooling, the rain was coming, but I thought I had timed it right.  Then it began.  First a few light drops, then the hard ones.  I speeded up thinking I might get home without getting soaked, but the big rain stung my face as I creeped the scooter up to fifty.  I was almost home.  I'd missed staying dry by minutes, and I was laughing.  It was a game.  It was fun.  It was good.

I wasn't in it very long, and when I got home, I changed, dried my hair, and jumped into the car.  The rain had stopped.  It was just a joke.

Lunch.  Lunch out.  An upscale place.  No Cafe Strange.  This was where the Republican wives of attorneys came.  And attorneys themselves.  Quaffed.  Well-dressed.  Clean and smug.  The bar was clean, the music soothing, the food spectacular.  I just felt good to be out again.  I laughed to myself at the conversation at the table behind me, two men in ties.  I hadn't laughed in weeks.

A new rain was coming.  I went home--to MY home--and took a nap.

Maybe, I thought, I could manage a small trip somewhere.

When I got back to my mother's later in the afternoon, she prepared dinner for me.  She heated up the leftovers from the night before.  "Good enough," as the hillbillies say.  "It'll do."

My mother grew up on a poor farm as a kid in house that had been a barn.  No insulation, chinked walls.  She slept with her brother and sister until her brother was too old to sleep with them any more and was sent up the hill to stay with his grandparents who owned the farm.  Her father was a bitter man.  He'd been blinded in one eye by a thorn while helping to clear some brush.  He was never the same says my mother.  He didn't work.  He'd go to town and hang around the pool hall all day.  They lived on the scraps her grandfather sent down the hill from the farm.  Her brother had it better.  She'd wake up on winter nights freezing, the snow blowing through the walls.  It is almost too much for me to believe.

She got a job when she was 16 working at a restaurant.  Her father, she says, would sit outside in the car to make sure she didn't go with any boys.  He was mean to her, she says.  She saved her money and put it in a drawer.  Her sister stole it from her and denied it.  She bought an exercise book at the dime store, and she and her friend began doing exercises every day.  She never quit.

I'll tell more stories about my family, but not today.  I am running out of time.  My mother married my father.  They were a handsome couple.  Here they are one New Year's Eve in the early '60s, my father in his early 40s, my mother in her late 20s.  I barely recognize my father in this photograph.  He worked every day as a tool and dye maker.  He fixed the cars, did house repairs, and mowed the grass.  He worked hard.  My mother worked for a defense contractor.  She got up in the morning and exercised before work.  Then she made breakfast for my father and me.  Years later, I realized that she picked up my clothes and made my bed.  She came home after work and cooked dinner and did the dishes.  No dishwasher.  She washed our clothes at the laundromat.  She did the grocery shopping.  She worked harder.  I went to school, watched t.v., and played ball.  I didn't work at all.

It is wrong for me to complain about my mother.  At 86, she stumbled and broke her shoulder.  She does the exercises she is allowed to do.  In ten weeks, she has had much improvement.  She just got into her car and drove herself to therapy.  She lives on a fixed income and makes the most of a dollar.

And me?  Oh. . . you know.  You've known for a long time.  I'm an asshole who tries to be charming.  It doesn't always work out.  Sometimes, I'm just an asshole who complains.
Posted by cafe selavy at 9:41 AM