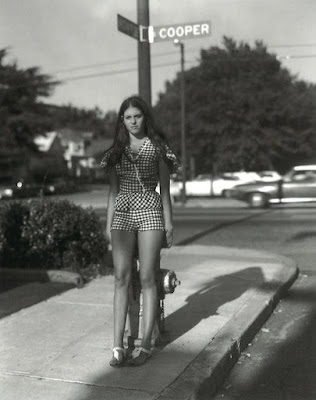 I hate that I didn't take this photograph.  Who did take it, though, is surprising.  William Eggleston.  Why did he quit making photos like this in favor of photographing wires across ceilings and ketchup bottles?  Sure, he wanted to do something new.  He wanted to give the world "new knowledge."  But I like this one and am terrified that I can't make an equivalent.

Of course, mine would be derivative, but it would be "new knowledge," too.  Maybe.  Most likely not.

I've been on a shopping tear recently.  I've been buying photography books.  They are very expensive, but I've been shopping around and have gotten some good deals.  The used books that show up are almost all in great shape.  I have stacks of them lying about now.  I'm sure this is my way of "getting out" of my mother's house, a reaction to my condition.

I may have mentioned I watched a documentary on the photographer Disfarmer the other night.  He is fascinating.  Afterwards, I went online and purchased two books about his photographs.  One of them came yesterday, "Becoming Disfarmer."  There is a lot of text in this one, and because it is fairly new, the discourse problematizes the meaning and theory of things.  I tried reading it, but between the t.v. and my mother's comments and questions, I wasn't able to retain much.  I will have to read it in quietude, but one thing that I do remember is the comparison between Bellocq and Disfarmer, both of whom died in obscurity, both of whom shot glass plates, and both of whom who were "discovered" in the 1970's to much fanfare and acclaim.  And since I've already been influenced by Bellocq's Lonesomeville Storyville photos, I am thinking why not Disfarmer's, too.  I've started shooting glass plates.  I'll make a cardboard sign with dripping black paint that says, "Portraits, 25¢" and set up my camera somewhere public.  Can I do it?  Will it work?  I think people will stop for a photograph.  The 25¢ is the hook.  Big old Liberator camera, too.  I'll look like a nut.

Who knows if I'll have the guts, but I should try.  I'll make the sign today and figure out how to display it.  Tape it to a stick, probably.  Anchor it in a sand filled can.  I should probably wear suspenders, too.

But why, I wonder, do I care about doing any of this?  To what end?  I can't figure that out.  I know that I am tortured, though, by trying and failing and by not trying at all.  It causes me great anxiety and it has never brought me anything good, really.  Why do I torture myself over something as minuscule as the making of pictures?

Ask Freud, I guess.  Or Jung.  Or maybe even Camus.

But don't ask my mother.  Don't even let her know about my photographs.  She throws them all away.

Alright.  A new day begins.  I am off today and can't wait to take a nap.  How's that for inspiration?
Posted by cafe selavy at 8:29 AM