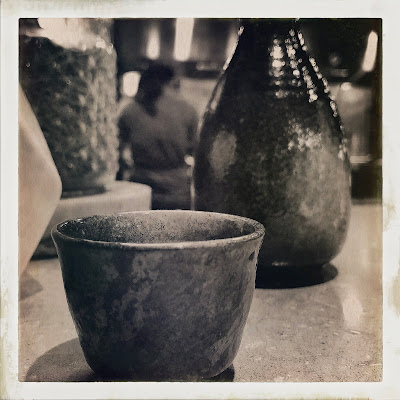 Yea, I know.  Jesus, it's looking like Facebook here.  But this was significant.  I'll get to why.

The past couple days, I left my mother's house for some hours to go out on my own.  I thought to run about town with my camera, but each day storms came hard and there was no point in going out.  I was left alone in my house, a place I haven't really been for months.  It was like a museum.  I didn't know where to start.  There were remnants of my past life, of the recent and distant past.  There were pictures of Ili on the fridge, drawings she made on the blackboard. The maids had been here, so everything was neat and tidy.  The bed was professionally made.  I sat in a chair not wanting to mess anything up.  I got hungry, but there was no food.  I poured a drink.  I don't imagine that liquor goes bad.

All in all, it was desultory.

As usual, before I left to go back to my mother's house, I called her to see if I needed to pick up anything at the grocer's for dinner.  Last night, she said that she wasn't hungry but that she would cook something for me.  Oh, no, I said.  I would just get something out.  When I hung up, I realized this was the first time I'd gotten out at dinner time for months.  I have been desiring two things, sushi and a noodle bowl.  Now, opportunity at hand, I was stymied.  Paralyzed, really.  Catatonic.  I sat in a chair and thought.  I wasn't sure how to proceed.  Parking would be difficult, but there was no use in riding the Vespa.  My timing was off.  Both places were sure to be full.  I really couldn't afford to wait for seating.  I sat longer thinking I should just go to the grocery store and buy something to cook up.  WTF had happened to me?  WTF indeed.  The door to the cage was open.  All I had to do was step outside, get into my car, and go into the world.  The good old world, though, seemed frightening.  I would be a freak out there, outside the bubble of conditioned living, out there with randomized behaviors.

I decided to try the noodle place.  I've had a stomach thing and was wary of raw food.  Something was going around.  Noodles were cooked and served near boiling.  I'd try.

When I got there, though, the parking lot was full.  A hipster crowd stood around outside sipping cocktails and waiting to be seated.  They looked menacing, like wolverines.  What if they wouldn't let me through the door?  I shuddered.  I was only one, though, a single.  Maybe, perhaps. . . .  I drove around back and found a spot, and without much hope walked up to the hostess stand.

"It seems hopeless," I said turning to the crowded lobby bar, "but I'm just one."

She looked around, smiled at me and said, "Do you mind sitting on a stool?"

What could I say.  She seated me at the kitchen counter, the only one there.  A row of backed chairs was empty.  I raised my eyebrow.  "I can't.  They already have their names on the waiting list."

A waitress came over right away and took my order.  I was awkward like a patient just released from a long stay in the hospital, or, perhaps, a man just released from a sentence in the county jail.  My movements were jerky, unnatural.  My eyes danced, my head bobbed on its own.  I felt like everybody's country cousin.  But--I had moved to the front of the line!  The pretty hostess had smiled conspiratorially and taken me first.  It was a victory of sorts.  For a brief moment, I had been privileged.  The natural order, for however short a moment, had returned.

After dinner, I went to my mother's and snuck myself a scotch.  I'm not supposed to be drinking, it seems.  She pretended not to notice, I think, and once I was seated on the couch, we returned to watching season five of "Justified."

I am glad not to have spent money on a Leica M10.  I have found some good deals, but I have demurred.  Rather, I decided to use my Sony a7riii.  Even its name is clumsy.  But it is small and lighter than the Leica, and I was able to put it and four lenses into one small bag.  The lenses weigh nothing which may not speak well of the glass, but walking around with the entire kit and caboodle  gives me many more options.  Well, walking around nowhere with it.  As I have said, it has been raining.  I will try once again today, but the weather report is not encouraging.

Point being, you get a phone pic of my dinner last night because I don't have much else to show right now.  The picture is merely illustrative of a brief but significant period of hope.  I am going to try to spend more time "out there" as my mother's recovery continues.  It is scary and quite lonely, but steps must be taken.  First my mother's recovery, then mine.
Posted by cafe selavy at 8:45 AM