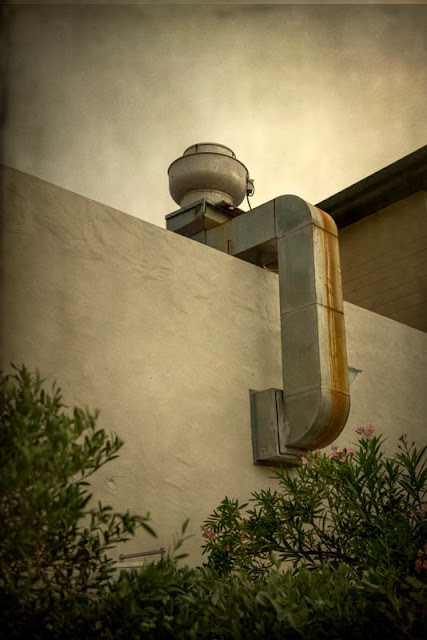 That meal I had at the noodle place, the one with a bowl of noodles, sake, and (forgot to mention) a cup of green tea ice cream which I followed with some scotch at home, added up to three pounds.  That is how much weight I put on the next morning.  And that is why it is impossible to lose weight.  All you can do is try to keep from putting more on.

The photo is of the vented chimney that serves the kitchen.  I took the photo on the way in.  It just looked interesting.  It is part of the World of Things that go mostly unnoticed.  We see them, of course, but don't look at them.  The more I look, the more I wonder.  There are people making fortuned from manufacturing these objects.  How does one decide to go into such a business?  Do people get rich or go broke?  I wouldn't know where to research an answer to that question.  It would probably make as good a topic as any for one of those reality t.v. shows.

I worked on this photograph.  I put as much work into it as I put into any of the Lonesomeville pictures.  After riding around at noon on my Vespa in the baking sun, after cruising streets and boulevards that looked abandoned in the melting heat, after wondering where everyone goes on these hot summer weekends when only ghouls and miscreants litter the sidewalks, after a mimosa at the Cafe Strange watching World Cup Soccer, I went back to my house and took a nap.  I guess I only wish to hide away from the world in unconsciousness.  Lacking resources and imagination, wine and a nap are all that I can fathom.  When I woke up, I dumped the few pictures on my SD card into the computer and did this.  The computer ran slowly, far too slowly, and I realized there are many ways I need to spend my money.  The a.c. couldn't keep up with the heat, the temperature in the house slowly rising.  No new camera for me.  God has plans for my money.

I have to keep a stiff upper lip, though.  These are the killing months in the sunny south, a time when rain and heat and rot conspire to dull the body and smother the brain.  I am especially susceptible this year.  I must find some zen or I could be in trouble unlike the trouble I've known before.

Is this why I began writing again?  Just to piss and whine and complain?  That is the reason I quit writing.  Maybe I'm forcing it with the daily postings.  I'll need to consider what I say and the way I say it.  I will try to find something more spectacular.
Posted by cafe selavy at 7:55 AM