Shall I Wear My Trousers Rolled 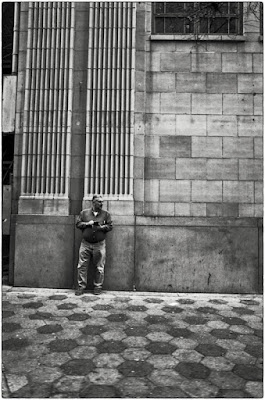 Sometimes even atheists feel like God just hates them.  That is the only conclusion you can draw at a particular point.  And then the only thing that matters is your response, or, as Bukowski said, how well you walk through the fire.

I've always been amazed that some people will tolerate torture.  Like Lenny Bruce, I know I wouldn't.  As soon as the pulled out the funnel and the hot lead, I'd tell them anything they wanted to know.  I don't kid myself.  I'm not brave like that.  I don't want to take a beating.

Once in a graduate class, the professor, who was an enigmatic cult stud with whom almost every student was enamored, asked me, "Would you rather give someone your money or take a beating?"

He looked at me like a dog will when you ask it a question it only understands part of.  I used to do that with my dog.  "Do you want. . . ."  She understood that part.  If I said "a walk," she understood immediately.  If I said "to go with me," she excitedly headed for the Jeep.  But sometimes, I'd fuck with her and say something like "a cucumber?" and her head would twist this way and that as she kept her confused eyes on mine trying to understand.  That's what this professor did.  He just couldn't comprehend.  After what seemed an interminable time, though, his face relaxed and he sat back in his chair for a moment, grinning, before he said, "Ah. . . I see. . . you want the girls to think you're the sensitive type."  But that wasn't it.  I just don't relish taking a beating.

Whether you like it or not, though, the beatings come, and the thing is, you are not asked to give up any information or even a confession.  As far as you can tell, there is nothing you can do to make the beating end.  It is just a beating pure and simple.  You know that because you give up the information.  Over and over again, you confess.  And your mind turns on itself like a starving cannibal.  And that is when it occurs to you that God just hates you.  There is no other explanation.

So, cursed among men, you go about stubbing your toe and running into doorjambs and tripping over breaks in the sidewalk.  Nobody likes you and you are sent to the back of every line.  And eventually you are broken.  You resign yourself to the fate.

Nobody enjoys this sort of talk, of course.  Not in a complete way.

I just realized that it is Friday the 13th.  Not good when you already sense doom in the air.

And indeed there will be time
To wonder, “Do I dare?” and, “Do I dare?”
Time to turn back and descend the stair,
With a bald spot in the middle of my hair —
(They will say: “How his hair is growing thin!”)
My morning coat, my collar mounting firmly to the chin,
My necktie rich and modest, but asserted by a simple pin —
(They will say: “But how his arms and legs are thin!”)
Do I dare
Disturb the universe?
In a minute there is time
For decisions and revisions which a minute will reverse.


In the room the women come and go
Talking of Michelangelo.

I think I'd better take it easy, watch my step.  But there is not avoiding the inevitable, which, when you realize what that means. . . .