The Perception Is All Mine 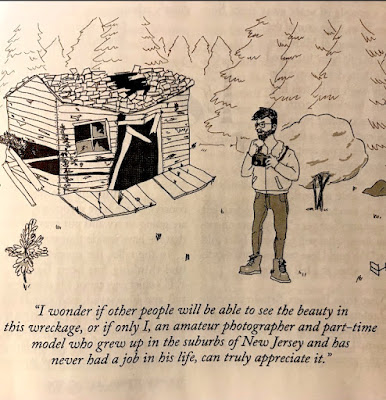 A break up does two opposing things simultaneously.  It shuts your mind down so you are unable to think clearly, and it causes you to consider some things obsessively.  These are difficult to reconcile, but it is what it is, to use a very dumb phrase, and you just have to live through it.

I don't know if this is a universal truth, of course.  It is, I realize, just what is happening with me.  I am unable to think in certain directions, but I obsess over the nature of what we mean by "real."

My secretary got married and seventy-six days later her husband died.  She is young and going through something that only a handful of people have experienced, so I can't even begin to try to give her advice.  When she shows up in my office and begins to cry, I can only be there as sympathetic company.  However, sometimes it seems that I need to say something.

I'm a hell of a sage.  But it is the same with all loss, I assume, no matter the size.

A friend came into my office yesterday.  She will have a baby this weekend.  She said she is ready.  She wants sushi and a cocktail.  We talked about sushi restaurants and cocktail bars, and she told me there was a good new place that just opened in Crackerville.  I cocked my head and said softly, "I don't really go there any more."

"Yea, that's probably a good thing.  Do you want me to tell you?"

Still, it was a punch to the gut.

My new mantra is that people can't help what they do.  And I think it is true.  That might even include me.

Wow.  I've completely lost my way.  I intended (for days now) to talk about our sensations of "reality," the forces and objects with which we interact, and how we perceive them without ever knowing what they are.  We try to find commonality in experiences, but I believe in it less and less.  We want to universalize our experiences.  We try to tell ourselves, "People are the same all over the world no matter what culture.  We share the same hopes, the same desires, the same dreams."  I can't even believe that is true in my neighborhood.  We don't share the same perceptions.  Some are colorblind, others can't hear, can't taste.  Then there is experience and age.  I am losing the old romantic notion of common human experience.  It is a myth.  The writers of religion knew this, the ones who wrote the words of the gods.  They knew that the only thing that would yoke us and make us one was fear, though they conceded that even that would not be universal.  Still, they knew a common fear was the only way to make things work well enough to get through the day.

I did not know I was going to write that, either.

I read this piece of writing advice from Hemingway yesterday.


The first draft of anything is shit. When you first start to write you get all the kick and the reader gets none, but after you learn to work it’s your object to convey everything to the reader so that he remembers it not as a story he had read but something that happened to himself. That’s the true test of writing. When you can do that, the reader gets the kick and you don’t get any. You just get hard work and the better you write the harder it is because every story has to be better than the last one. It’s the hardest work there is.