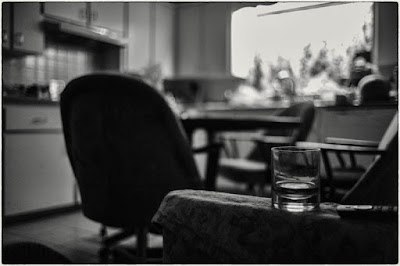 I made a tremendous fish stew last night for my mother and myself.  But there was enough for six.  You should have come, too.  I guess there is nothing really difficult about cooking soups and stews, but the process and results always amaze me.  It just works.

We watched Anthony Bourdain while we ate.  He was in an interior part of Brazil that looked like a set made for a photographer.  I decided I would go if I could remember where it was.  I don't hold much stock in what he says about the food.  It's t.v.  You can't know if the food really tastes good or not.  He could be eating boiled turds, but through the magic of television. . . .  But it was a nice backdrop to our perfect stew with crusty bread and a sav blanc that only I used.  My mother isn't drinking any more.  I used a lot of it.

Dinner done, I got up to do the dishes, and as I did, I crowed about how good the stew was.

"I'm telling you, I'm a good cook.  Tell your friends," I said jovially.

"What friends?  I don't have any friends."

Man, I'm tired of this refrain.  It was the perfect way to ruin a good meal together.

"Well, don't tell anyone about it, then.  Keep it to yourself."

My nerves are shot and alcohol ain't doing it any more.  But that is what I've got.  I finished up and poured a big scotch.

We watched a second Bourdain, this one in Rome.  He decided to use his girlfriend as his guide, though he never mentioned the relationship.  Watching it now, though, you see it.  She is a dour girl and he all jumpy trying to cleverly please her.  If you are a guy, you get that right away.  It is a horrible thing to watch.

Watch it.  It's on demand.  You'll see what I'm saying.  She never laughs, never smiles, is never warm in any way.  She just keeps throwing little jabs.

Nothing man.  There is nothing you can do.  Just walk away.

We all know now that he should have.

I should mention that I broke the habit yesterday.  Oh, I rode my scooter, but I went far away to a new place.  I don't usually ride my little scooter so far from home, and it was a little bit of an adventure.  I drove through a distant industrial part of the city.  Nobody was around.  It looked like a movie set.  I wished I had a girl there to photograph.  But I didn't plan on taking any photos.  That was another part of my breaking away from routine.  Coming back, I didn't drive any of the usual roads.  And I didn't go to the Cafe Strange.  I'm not saying the day was anything different.  I still went home and took a nap, read and drank wine.  But somehow I kept the needle out of the vein.

I went to bed with travel thoughts in mind.  And that worked until three when my mother got up and started banging around.  I didn't fall back to sleep after that.

I'm tired of bellyaching, and maybe I'll quit it.  I don't enjoy my mother's, and how much different from hers is mine, really?

That episode of Bourdain, though, telegraphs it all.  You think that if you just stand the right way, say the right words, and don't breathe, it will all work out.  But it doesn't.  He was doomed the moment he tried.  Goddamnit, Bourdain, did you just get too old?  Maybe that's the curse.  But Jesus, fellow, you should have just walked away.
Posted by cafe selavy at 8:04 AM