When Were Times Good? 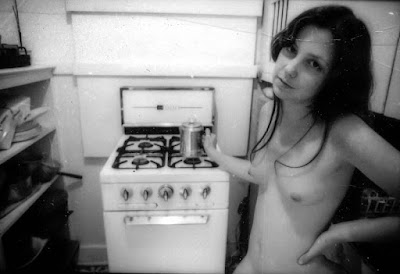 These ARE uncertain times.  There is no doubt about THAT.  But the times have always been "uncertain."  Each era (whatever definition) is composed of unique circumstances and forces that dictate the public demeanor.  We often tend to overlook that.

O.K.  I've stated the obvious oafishly.  I am, however, in search of a point.  I have one and I'm going to make it.  "Make" it might be overstating.  I'm going to try to say it.  I haven't really spent much time thinking about how to "make" the point organizationally.  I am hoping, however, that the truthiness of it will be clear.

I'm tap-dancing around it, I know.  Basically it is this.  Quit condemning my culture if you weren't raised in it.  Yes, I do.  I have a culture.  Too many people believe they understand it because it was "dominant."  It had its own language, they say, that silenced the "other."  It was bad.

There is too much "reach back" of the sort my "people" used when criticizing "The Greatest Generation."  We did it, and it was wrong.  My generation did not understand their parents' generation, but we didn't feel we needed to be in the right to criticize.  We invented a new language, scripted new creeds, followed new leaders.

We had different drugs and we had sex.  That's right, we invented a new kind of sex that had never been dreamed of before.

O.K.  I've lost my tongue somewhere in my cheek and lost my point altogether.  Like I said, I haven't thought this through.  I just felt it when I saw this yesterday. 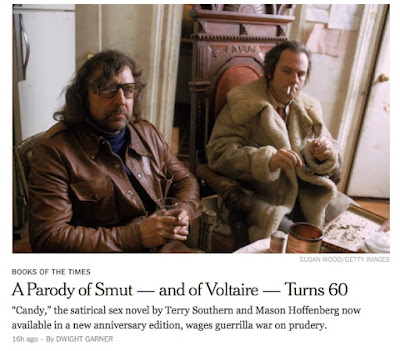 "Candy."  We had a copy of the book in our Jr. High School.  Not in the library, of course.  Some kid had apparently stolen it from his or her parents and it passed from clandestine to secret hand, worn, dogeared, stained, appropriate passages underlined and annotated with crude marginalia.  I doubt that many read the entire book.  I did.  I was a reader.

When I saw this in the New York Times yesterday, I wanted to take a shower.  Look at those fellows. And why did it take TWO of them to write it?  Did they have to pool their sexual "knowledge"?  Who knows.  But as an anthropologist, I can only wonder at costuming and plumage and what it might say about their tribe.  There has been, perhaps, cultural transference to members of the Russian Mafia tribe who had a big influence on similar peoples in Eastern Europe.

That, at least, would be my preliminary thought.

What I remember of the times, though, (to try to get back to my point) is that boys envied girls.  Sexually.  They had a power we would never know.  If I were a girl, boys would say with desire and longing, I'd screw EVERYTHING.  You see?  They could.  As a boy of the times. . . well. . . as it was for Southern and Hoffenberg, sex was an almost unobtainable myth.  We knew that the act revolved around a few girls who we only knew through reputation.  If I were a girl, I thought. . . .

So. . . OK?  Are we clear?  Boys wished that they were girls.  But we weren't, so we had to fight with other boys all the time.  But that isn't what we really wanted to do.  Nope.  Hell, our parents and the school officials wouldn't even let us grow our hair long.  If you did, you had really be ready to fight.  We were considered transgendered, I guess.

When one of the school's badasses stripped in gym class and revealed he was wearing his girlfriend's underwear, however, we all went mad.  Jesus Christ, Ricky.  Holy shit.

Candy, the male fantasy.  It's easy to criticize now.  We're culturally superior to all that.

Oh. . . the picture.  This was a girl from college in an advanced photography class.  I didn't really know her.  I'd seen her around the lab but we had never spoken.  One day she asked me if I would help her with her photo project.  She was doing self portraits with a medium format camera and needed someone to make sure the framing was right and to trip the shutter button.  This photo is one of the ones I took for my project before I helped her with hers.  I was a bit shy.  When I had finished taking a few, we set up her camera on a tripod very close to the ground.  Then she squatted down before the lens, legs akimbo, and I just about shit myself.  Really.  My bowels went loose.  Here she was. . . in the flesh. . . and I could merely concentrate on my sphincter.  I'd never met anyone like her before.  I was astonished.

I never saw the final prints from her project.  This picture--well, a real print of this image, not this, which is a scan from a disintegrating proof sheet, the only remains after my mother through away all my negatives from that time--was chosen for the student art show that term.  It and a photograph of my girlfriend and I naked as John and Yoko.

Those were different times, different values.  Like so much else, they've been drawn as political cartoons.
Posted by cafe selavy at 7:54 AM