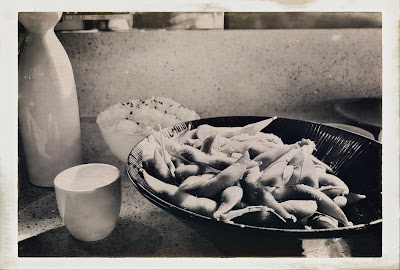 Week's end, I made it out for an early moment.  Sat at the bar, alone, and watched the parade go by outside the big plate glass window.  I ate and drank and thought like I have a million times in the past.  And in an hour, it was over.  I went to my mother's.

"Did you already eat?"

I gave up.  We watched three episodes of "Mad Men."  Then I went to bed.  My mother stayed up to watch more episodes of "Naked and Afraid."

I get up early in the mornings to have some quiet.  Reading, writing, and coffee.  But my mother gets up soon after me.  Why?  She wants to talk.  Everything is interrupted.  I thought for a moment that I wanted to write something here, but now I can't remember what it was.  Some vague memory of one of mom's shows, perhaps?  That up to five percent of Americans have been abducted by aliens?  This was reported by a Ph.D. at a convention of the abducted.  The hall was packed with people telling of their experiences.

"What do you think, that all these people are just making this up?"

I have to admit, there was an impressive list of congressmen and actors who say they have been abducted.  It must be true.  All the abductions are practically identical.  Aliens are highly predictable.  And they love a good probing.

I am beginning to pray for an abduction.

I have to quit drinking, but seriously, I have nothing else.  I can't function if I smoke pot and I don't have any good prescriptions.

I guess they think they are winning.
Posted by cafe selavy at 8:47 AM