A Saga (of Sorts) 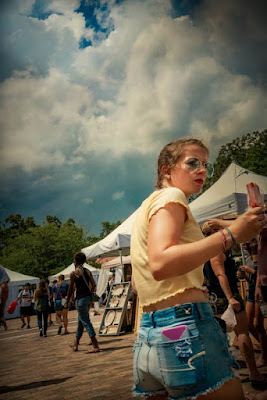 In the morning, after coffee and the news, and after bugging my friends with clippings and links to stories as is my irritating habit, I was going to go for a run.  I got dressed, and then the rain came.  I was flummoxed.  I didn't feel well and didn't want to run anyway.  But I didn't know what to do.  My mother was fine, of course, with me sitting in a chair all day with her.  My nerves were bunched and my body was quivering.  I was in what they call "a bad place."  I wasn't catatonic.  I couldn't stop pacing.  It seemed to me that I no longer knew how to do the simplest of things.  Two centimeters from a crying breakdown.

I showered.  That was a first step.

I packed up my car.  That was the second.

I told my mother I had to buy some things for the house.  That was the third.

I sat in the car for a long time deciding.  My mother sat in her chair in the garage, a monument to complete resignation.

I had to go the wrong way to go the right one.  I drove as if to my house, then went around the block. It was raining.  I didn't care.  I headed for a town about forty minutes away, an old cracker place full of old-time religion.  I was uncertain.  I hadn't been there in my adult life.  I had no idea what I would find.  But I had cameras and a notebook.  I was your correspondent "on the road."

O.K.  But you don't know.  You really don't.  I have become an emotional slave, a crippled mess.  What do I have to think about while sitting in my mother's house other than that I have, in the past three months, been completely abandoned by my former life (split infinitive and all).  It may seem trivial from where you sit, I know.  It would seem so to me, too.  The problem, you think, is so simply solved.  That is what it is like to be on the outside.  But the inside is full of self-doubt and condemnation, whiskey, nerve pills, a little boo, and more whiskey, jet fuel waiting for a spark.

I used to be brave and confident, and little scared me.  Oh, I was scared of things like avalanches and lightening strikes and poison darts, sure, but I felt that I could handle whatever came.  I could dodge a bullet and beat the bad guy.

I wasn't 86 years old then.  This life has left me crippled in many, many ways.

As is my wont, I got off the big highway as soon as I could to dart down backroads, through countryside, looking. . . always looking.  This wasn't Grit City.  It was Crackerville, pure and simple. It is where my people came when the old neighborhood was taken over by gangstas.  And I'm not kidding.  I saw a sign for one of my old high school classmate's insurance agency there.  He used to be in the old neighborhood.  He went with the clients, I know, and my high school comrades were not the most enlightened people you might meet.  But they were more so than the original inhabitants of Crackerville.

Crackerville is on the banks of one of the largest lakes in the state.  It used to be surrounded by orange groves.  When I was a kid, my father had a boat, and we would go there to launch it for the day.  There was a big public swimming pool there, too, that we used to go to in the summer.  The lake, because of the runoff from the groves, became one of the most polluted bodies of water in the country.  It died.  I read twenty years ago about a study that showed the effects of the nitrates on alligators.  The males were feminized and had a low fertility rate.  The study was extended to residents who lived near the lake.  The males had been feminized, too.  Their reproductive organs were smaller and their sperm count drastically reduced.

Well, that's one way to deal with the Cracker problem.

Somehow I made it to the center of town.  I could see the giant Farmer's Market in the town's square and found street side parking just a block away.  I grabbed my camera and took a big breath.

Man. . . downtown was beautiful.  There were funky coffeeshops and beautiful restaurants and yoga studios and every kind of houseware and clothing store you could want.  There was an old theater and an old hotel restored.  I wandered the streets with the same photo-apprehensions, though, waiting for someone to come up to me with righteous indignation and anger.  A camera is a terrorist weapon in the hands of an 86 year old.  You can look that up.  But there was no rain at all and the streets and square was packed, and I have to admit, I had fun.

After a couple hours, though, I was exhausted in the way that such photographing will exhaust you, and I decided I would leave before the cop that had followed me for awhile decided that I was worth troubling.  I decided to cruise the countryside and see if there were any traces of things I would remember from childhood.

I drove to the lake.  There was a community pool and a shuffleboard court definitely from the late forties or early fifties, part of a giant trailer park community with very prominent signs letting you know that everything there was for residents only.  I was already tired and didn't have it in me to make another photo adventure, but I am self-committed to coming back.  I'll probably get arrested for trespassing or worse, but there were some things in that trailer city that you don't see any longer which require my eye for preservation.

Past the park there were scattered developments with signs announcing the names of the "communities," mostly large, cheap stucco houses considerably lacking in trees and landscaping.  The most interesting things, at least visually, were the water towers and the sewage plants.  I cut down a couple more roads that led back to town, through some "minority" neighborhoods that looked just like the cracker neighborhoods on the city's outskirts, places I would love to get out and wander through, but that would take a real and deep commitment of the type I'm not ready to make just yet but of the type I tell myself I one day will.

Now, the adrenaline wearing out, I was tired and hungry, and so I turned in the direction of my own hometown.

An hour later, mid-afternoon, I was sitting in a favorite boutique cafe eating a huge, thinly sliced turkey club sandwich with thick cuts of sugar cured bacon and avocado slices and drinking mimosas. And, for the first time in months, I could say that I felt a twinge of happiness.

I went to my house and lay on my bed, a bed I haven't spent the night in for over three months.  Two hours later, I woke.  "Oh, shit," I thought, "I have to hurry.  I have to make dinner for mother."  But I wanted to dump the images from the card into the computer, and I wanted to work on one or two before I left.  I put on some music--MY music--that I haven't heard for a long while and began perusing the day's shoot.  I picked an image and started working it.  I wanted to do more than just tweak the sharpness and color and contrast.  I wanted to work on a "signature" look, so, as I used to do so many years ago now, I began to explore, invent, mix, and play.  What fun.  The music carried me along, the images changing before my eyes, me trying to predict what would happen if I added this or took away that, and the afternoon turned to late afternoon turned to early evening.  I had to go, I had to go, but I wanted to stay.  I remembered my life, one I enjoyed a long time ago, and I was loathe to leave.

But one has duties, so I rushed out, went to the grocery store, and hurried back to my mother's.  I opened the door to "Gunsmoke" and the blare of commercial t.v.  I panicked a bit when I checked the whiskey, but then I remembered I'd bought another.  I opened a good bottle of wine--I thought I deserved it--and began preparing the evening's meal.  My mother hovered.

Dinner done, I wanted to watch a documentary on a British photographer, but my mother had no interest in that.  We watched three more episodes of "Mad Men."  And then, much whiskey later, I want to bed.

I'll have other pictures and maybe other stories if I get a chance.  If I can work on the pictures.  They are over there, at my house. . . waiting.
Posted by cafe selavy at 9:29 AM