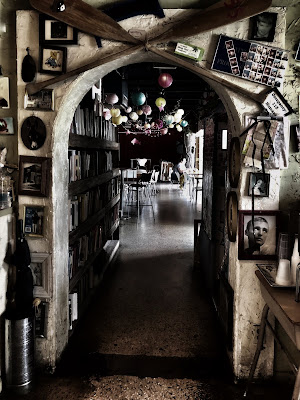 Q The Astronomer will quarrel with me about the timing of Last Night's Full Moon.  It is equally full tonight, of course, as the lunar event occurred at seven-something this morning.  I should know.  It woke me in the night shining through the blinds my mother had left open in the bedroom where I am sleeping.  It had been too cloudy to view earlier, but there it was, peeking through the clouds keeping a very bright eye on me.

The Italians say that you can go crazy if you sleep with your head in the full moon light.  It has never bothered me 🤡.

But I start at the end of a day and a night.  Remember all the things I told you my day would consist of yesterday?  If not, you can go back an entry and reread.  None of that happened.  None of it.

After writing my morning missive, bothered with tremendous back pain and still in the grips of the muscle relaxer, I decided to repair my mother's guest toilet, the one I am using.  It had begun to cause hammer pipes in her bathroom walls.  I read about that.  The pipes vibrate and bang and sound like a steam engine coming through the walls.  I had figured out ON MY OWN that the cause of this was the toilet, so I went to the hardware store and bought new guts.

"Have you ever done this before?  It's easy."

So I did the things that the instructions told me to do.  I drained the tank, unscrewed the things that needed unscrewing, removed the old part, and put in the new.  In the process, however, I broke the tank top.  I had it resting on the toilet lid and it slid to the floor.  You might think that it would withstand that tiny drop, but you would be very wrong.  It shattered into pieces.  It was an unnecessary accident, of course, one caused by an insipid hillbilly laziness.

What could I do.  After cussing and cleaning, I went back to the repair.  It was easy, alright.  Except for one thing.  The place where the part joined the water supply on the bottom of the toilet tank kept leaking.  The pain in my back was made worse by the twisting position I had to take to look under the tank.  The relaxer hangover made me slow and foggy.  It took me four times as long as it should to do anything.  Over and over I disassembled and reassembled the toilet guts, but each time, I had a leak.

My mother was resigned to buying a new toilet and paying a plumber to come install it.  The morning had now become afternoon.  I was shaking with hunger.  I decided to go on the website on the box to see if I could find any help.  I watched video after video of how to repair the toilet.  I didn't know they were there, but I should have watched them before I began.  Still, none of them told me how to repair the leak at the bottom of the tank.  After half an hour of plumbing videos, I went in for one more try.  I now realized what each part did.  If the bottom of the tank is leaking, further tighten the parts.  I did.

I fixed some breakfast and went online to try to find a replacement top for the toilet.  American Standard.  They make about a hundred versions.  I saw a picture chart.  Which one?

"Hey, ma, come look and see which of these is yours."

"They all look alike."

We took the computer into the bathroom.  That helped a little, but not enough.  Why don't they write the model number on the toilet?  The helpline says you can find that in the manual or on the delivery box.  My mother bought the house, not the toilets.  Jesus Christ.  There were tops.  There were many, many tops.  I went to the American Standard site, to Amazon, to eBay.  I could get one pretty cheap, but I couldn't figure out which one it was.

The day was waning.  Mid afternoon.  I gave up.  I needed to go for a walk if I could.  My back was really seizing up.  My right hip was about three inches higher than my left on which I kept about 75% of my weight.  I couldn't straighten up, so when I walked I corkscrewed and winced.

I thought of Ili.  Why'd she leave?  Surely she would miss such things as this.

I drove to the gym.  I was intending to walk from there then lie on the mats and stretch and then get into the sauna and the steam room, but about a block from the car, there was a booming clap of thunder.  I turned around.  Treadmill.  Five minutes after I returned, the deluge began.

I did everything I'd intended and I could almost stand up straight.  It was 4 o'clock.  I went to my house, limp as somebody else's noodle, and lay on top of my unslept in bed.  I made myself get up at five.

I would go to the Cafe Strange and have a Chai, I thought.  The rain was gone, and though it was cloudy, I didn't think it would rain again, so I took my little scooter.

They didn't have chai.

I got a drink instead.

The cafe was packed.  The late afternoon's dim gray light fell through the wall of windows.  Outside sat the oversized gray haired woman who was always there, a sad fixture.  An even bigger man with a gray ponytail and oversized belly eased himself into a seat, his knee held in a flexible brace under his khaki shorts.  His wife brought him water and returned to the counter to order sandwiches.  At another big table, a large group was talking wildly over the inevitably strange music of the cafe.  Two families with children set up a table on the stage with the red velvet curtain where, I assume, musicians perform late at night, or maybe it was where the poets read.  Hipster families with their hipster kids.  Two nerdy young girls stood round shouldered looking over the bizarre rooms, obviously here for the first time, eyes wide and dancing, bodies cramped and awkward.  They stood close and whispered to one another with half-hidden grins.  "This place is really cool."  Eventually, they made their way to the Photomat and had their pictures taken together.  They giggled as if they had made it to the holy land and yearned acceptance.  Outside, a girl in very short jean cut offs talked confidently to two boys in t-shirts, one bearded, the other with sandy hair pulled into a semi-bun, obvious acolytes.  The cluttered rooms, walls haphazardly hung with framed photographs and paintings of varying sizes on every available space, strings of colored lights and lanterns hanging from the ceiling.  The priests and priestesses of the kitchen and bar lazily taking orders with the greatest ennui.  In every room, nook, and cranny, behind bookcases, before the lone manual typewriter, at the long bar in front of the plate glass windows, people sat with their computers and headphones conducting business, doing homework. . . composing music, writing novels.  Who knows?  I have come to prefer this weird and broken scene to the chi-chi bars and their perfect cocktails for reasons I don't know.  This cafe is a suburban crossroads, an intersection of non-belonging, a union of outcasts and loners, of the would-be and never-did, a surprising market off the main route for those who wandered off The Silk Road.

I wanted to stay and drink, but as always these days, I had to return to my mother's.

I will take a long walk and see what unfolds.  The days are hideously hot and wet, but what can you do but try to counter them as best you can.  I will make myself no promises today.  It seems impossible to follow through.