The Old Yawp and Howl 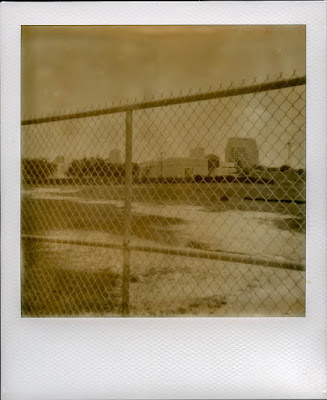 I somehow ended up with about six Polaroid cameras in the last month or so.  Accidental, sort of.  I owned some and bought others very cheaply.  I have boxes and boxes of the old Impossible film.  I tried to support them years ago by purchasing their crummy instant films.  The emulsions faded pretty quickly.  I put some of the old film that I have not stored well into a camera and went out to shoot.  This is the quality of the old film.  There is some lousy charm in it.  The images must be scanned quickly, though, for they will fade away soon enough. 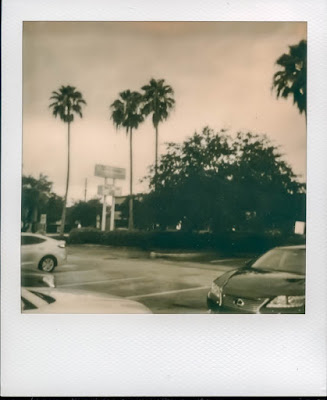 Here's an example of the new Polaroid film.  I don't know yet how stable it is.  It is not as bad as the old film, and it has a certain throwback charm.  If you can pick up an old Polaroid camera, you can get photos for about $2 a shot.  Polaroids are just fun.  They show the world in a way it might have been.  This photo of palm trees in a Walgreens parking lot will be fun in the future.  Everything will look old and strange.  Hell, it already does.

The weekend looms as do the coming storms.  It is supposed to rain here this weekend.  What can I plan?  I will buy some new books, maybe, though I have many unread sitting in my library right now.  But there is the thrill of a new purchase that cannot be denied.  We are genetic consumers, I have read.  It is science.  QED.

My buddy, the one who provided me with the expensive scotches last Friday night (was it last Friday night?) wrote to complain about my whining.  He just had dental surgery of a seriously painful kind.  I'll chalk his complaining up to the pain and the meds, for he is a great reader and knows there is no story without conflict.  That's the way it works.  A person wants something, but there are obstacles to attaining it.  The struggle is the point, not the outcome.

You see, I'm not trying to tell you about me here.  I do try to tell me about me, but for you, the reader, I'm trying to illustrate life's possibilities and limits and provide both positive and negative paths toward (non)attainment in a somewhat tongue-in-cheek and comical way.  The old Yawp and Howl.

But I know what he means.  I have gotten sick of the whining of others, too, and the better story is one where the professor sneaks into the dorm room to make love to one of his students but breaks a tooth in the middle of the act and is seen sneaking out of the disgusted girl's room coat in hand.  That is the beginning of "Blue Angel," by the way, a wonderful novel if you have never read it.  I highly recommend it this weekend.

But I don't have those stories right now.  I have the factory and my mother and the occasional guilty purchase. I have morbid conversations and mushy vegetables and overcooked meat.  And I have way too much liquor.  I have no romantic interest and no chance to find one.  So the only stories I can tell are coming from a very small and shallow pool.

Unless I write about the troubles of our times.  And there are plenty.  There is no end to trouble, friends, and no one wants to read about a sunny day where everything goes right.

And, as unfortunate as that may be, I haven't so many of those days right now, either.  They are coming, though.  I have to believe that to go on.  One day, they are coming.
Posted by cafe selavy at 9:05 AM