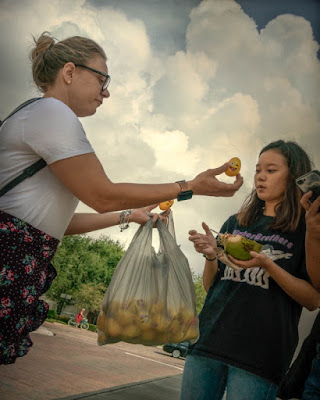 I like starting off with meaningless phrases like, "The thing is. . . ."  I guess it is not totally meaningless in that it conveys a certain sense of importance to the speaker, a pat marker, if you will.  But the thing is. . . guys are overwhelmingly saying, "What's wrong with the little prick."  In the end, I believe you'll find most fellows not really caring that Asia seduced a seventeen year old.  They aren't saying within shouting distance of a microphone that they are for it, but there is an inherent wink and a nod.  That is what happens inside the boy's club.  There is, we are taught, another language or space that women have to which men are not privy, and if this is true, I wonder what is being said there.  The women I've talked to seem conflicted about the "affair," and what they say to me privately does not come out in more public discourses.  That, however, is simply my experience and not a broad survey of gender or gender-like distinctions.

Most women I've ever talked about the subject with say they do not find teenage boys attractive.  The thing is. . . there are all those female high school teachers who get convicted for seducing teenage boys.

You, my friends, know how I feel about such things.  There is little that shocks me about human behavior, and I have yet to hear from the burning bush or to have found the sacred tablets.  Too, I know plenty well that what people say in private is often different than what they say in public.  I took a graduate anthropology class on that very topic once.  It is documented.  Most of my life, I have sought the private voice in people, the confessions of their twisted little souls if you believe in such things.  The premise of most of it was vocalized once by a friend of mine on this very topic.

Was it Oscar Wilde who coined the phrase, "The love that dare not speak its name" or was that coined about him?  Or did I just make that up?

Anyway, as my mother likes to say, the revelations about Asia don't change the way I think about her or her situation.  I would have been as susceptible as Bourdain even though I know better.  There is a type who cannot resist it when a beautiful woman says in confidence, "I am not a happy person, but I believe you could make me happy."  Oh shit!  The ground falls from under your feet.  "I don't even feel like taking my meds anymore."  Fuck yea.  Guys like me, we can be saviors.  We have that power.

Next thing you know, we're standing on one foot, hands in the air, trying hard to get reception.  Hello.  Hello?

Beautiful lips tell beautiful lies.  I'm sure that was said by a man with a broken heart.  But me, I'm one all too ready to believe them true.  I think I'm pejoratively referred to as a romantic.

But the thing is. . . why is nobody questioning Ronan Farrow about this?  He has beautiful lips.

So did Trump.  Look at the pictures of him when he was younger.  He always pursed his lips before and after he spoke like a perfect little cherub.  Go back and look.  He had great lips.

I love my Leica M10.  I'm surprised by how much I do.  But enough is never enough, and less than two week after my purchase Leica has released the M10-P, and it has the quietest shutter ever made.  I can't stand it.  That is the only significant difference for me--the quiet shutter.  And now, I am obsessed.  I won't be happy until I have that quiet shutter.  I won't, and I can't stand it.  I don't know what I will do, but I know it will be awful.  There is nobody to prevent me from ruining what remains of my life, no one to tell me no.  As I've said, there is a little voice in me just now telling me I "deserve" whatever it is I want right now.

But there is another voice telling me that I will get what I deserve, the one that wakes me in the night.

And therein lies the tale, doesn't it?