A Beautiful Day in L.A. 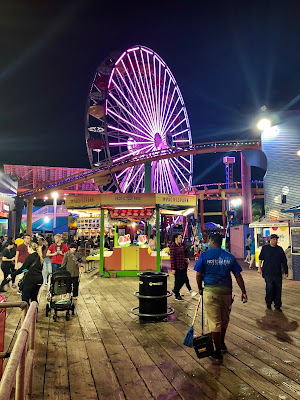 O.K.  I am recovering from the whiny little bitch phase I had in my last post.  I am toughening up, learning to live on my own on the road without the comforts of home or my cozy 1930's Palm Springs hotel.  The weather changed, and when I got up yesterday morning, the sky was clear and blue.  My mood is overly effected by weather.  After acidic coffee and a bagel from the lobby, I showered and hit the highways.  Saturday is a good day to drive in L.A., at least the mornings.  I wanted to see some photo galleries that were miles apart.  Google Maps took me on a tour of the city.

The first gallery I went to was the best.  Peter Fetterman Gallery had an exhibit called "The Fashion Show."  I fell down.  The first giant photos when you walked in were by Irving Penn.  But just beyond that was a wall lined with giant Sara Moon photos, color Fresson prints that are hardly ever done. 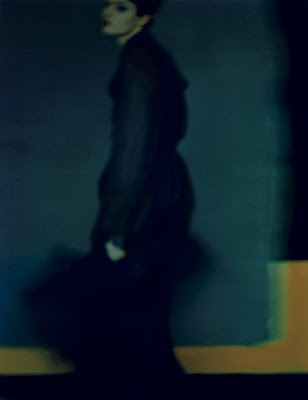 That was just the beginning.  There were William Kleins and Lillian Bassmans and Jerry Schatzburgs and Norman Parkinsons. . . .  I was thrilled, but the prices were out of range.  The big Moon's went for $30,000.  In bins, they had other prints for sale.  I could buy a Klein for $8,000, for instance, an 11"x14" signed black and white archival print.

My knees were shaking.

The gallery was in a group of converted warehouses that were now home to many other wonderful galleries.  I popped into one where the walls were lined with the paintings of Harlan Miller. 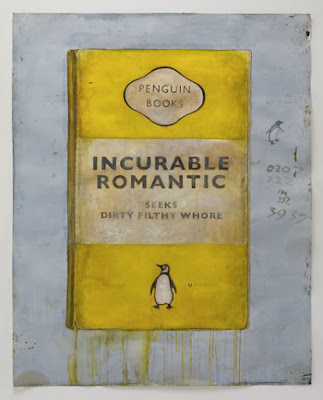 I've been a fan but had never actually seen one of the paintings.

Then another exhibiting the works of Elena May Siff's homage to Italo Calvino's "Invisible Cities," small 3D fabrications that are too difficult to explain.  From there to another gallery full of photographs by a woman whose name I can't remember (the gallery card is in the car).  In toto, I was there for hours.

Then into my car and off to the Annenberg Space for Photography.  Long drive, and it was closed for a new installation.  Off againto the Kopeikin Gallery and more photography.

By now the traffic was picking up and traveling was slow, so I decided to go to the Taschen bookstore that was not far away.  I didn't know, but it was located in some big Beverly Hills outdoor, upscale mall.  I had to park in a lot, and afraid that I wouldn't find my car. . . . 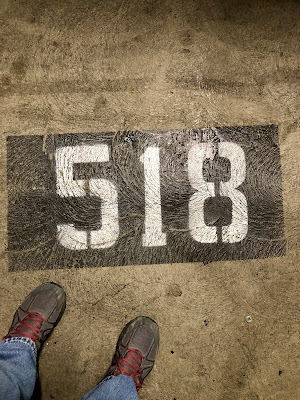 There was a lot going on in this place, kids wanting to be 90210 all dolled up in that rich California way.  As I walked across the plaza looking for the bookstore, I suddenly felt that I was wasting my day.  I hadn't taken any pictures except to mark my car's location, and now here I was in Shinola looking at a two hundred dollar billfold.  Oh. . . don't think I didn't want it.  It was a beaut.  When I left, the clerk stared at me as if I had just stolen something.  I guess I wasn't looking like a Beverly Hills shopper.

When I got back to my car, the day was waning and traffic had swollen.  The ten miles back to my hotel took an hour, I-10 a solid parking lot.

I was back to my hotel just a bit after five, and I realized I hadn't eaten anything but a bagel all day, so I picked up one of those little scooters off the sidewalk and buzzed my way down to the upscale bohemian street for dinner at a place called GreenLeaf, an organic, sustainable food restaurant that served killer cocktails.  It makes no sense, perhaps, but it was cool. 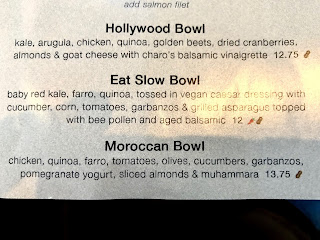 I've decided to eat this way back home, bowls full of healthy, fun things.  Right?  That's what you do on a trip, change your life.

I must get going now.  I want to get to the Getty Museum when it opens so that I can avoid traffic and get parking which I read is very limited.  So a quick shower and off into what is another gorgeous SoCal day.