ALWAYS Have a Camera 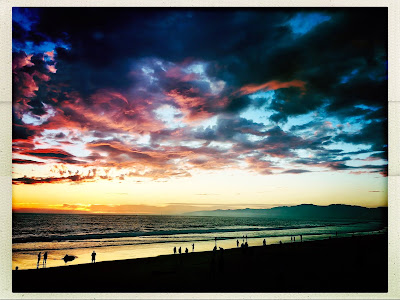 Sunday in L.A.  I spent most of the last day of September at the Getty Museum.  Now that might have been a mistake, but it was an unavoidable one as far as I can tell.  I did not consider the days well when I booked this trip, and as a result, I've missed some things.  You see, you can not drive in L.A. most of the time.  You will eat up half your day--literally--driving across town and back, so I have had to plan my visit according to traffic.  On the other hand, some of the things I wanted to visit are closed the days I wanted to visit them.  In some cases, I didn't know that until too late.  Selavy.

That is not to say that a visit to the Getty is a mistake.  It wasn't.  The Getty is a beautiful structure in a beautiful place with fantastic views all around.  I looked at the paintings on the top floors of the two main buildings which was fun, especially noticing the 16th century European inability to capture the human form correctly.  In order to account for perspective, arms were often improbably long or short, and elbows and wrists would bend at anatomically impossible angles. 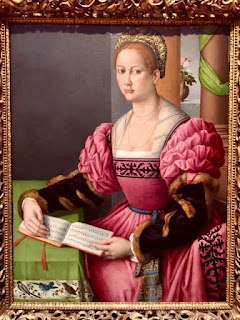 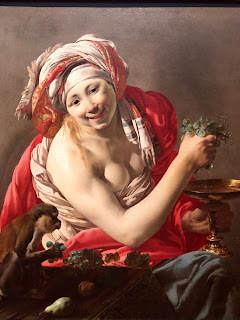 But the main exhibit was "Icons of Fashion Photography,"which was important to me, but the crowd was interesting, too.  A large proportion were Asian, and they were the most fashionably dressed.  Of course, I had decided to leave my cameras in the car, tired of lugging them around every day, so all I had was my phone.  Phones, no matter what the ads say, are poor substitutes for cameras, and I regretted not bringing at least one. 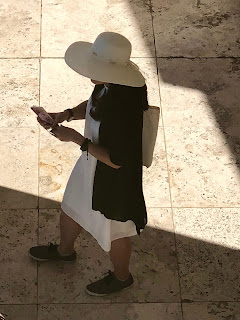 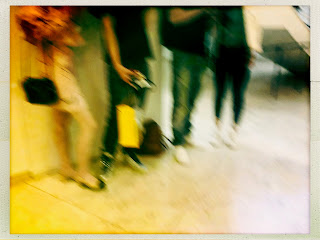 The Getty took most of the afternoon.  I looked to visit some other galleries, but I found out that most of the remaining ones I wanted to see were closed on Sundays.  Frustrated, I decided to head to Beverly Hills.

Rodeo Drive.  What can I say.  It was the brightest, clearest day I've ever seen.  I thought I'd feel out of place as I was wearing shorts and a t-shirt, but I was wrong.  The sidewalks were filled with hillbillies taking selfies.  I took some pictures, too, but didn't stay long.  It was late afternoon and I wanted to get back "home."

The traffic had gotten worse.  It took over and hour to cover the seven or so miles.

Driving back, I realized that Sunday was the day to have stayed on the beach.  The crowds were crazy.  This is where the real photographic opportunities lay.  I pulled over and miraculously found a parking spot overlooking the Santa Monica Pier.  No phone pictures of that, but my cameras were popping.

Back to the car, and a slooooowwwww crawl the next three miles back to Venice.  There were jumping everywhere.  Bands were playing, people were crazy.  I sat in the car, dying.  I had chosen the museum.  Had to.  It wouldn't be open again before I left.  But man, did I choose the wrong day to leave the beach.

Venice is young and pretty.  Nothing has more ego than a 29 year old bartender here, male of female. They are cool.  They are certain.  I was lucky to get a drink.

L.A. would be a lovely place to make pictures if you had a long time to get to know the place and the patience to get around.  It is not a town to pop into for a few days with a camera.  Everything here is timing as far as I can tell.  L.A. is a beautiful deception, too often held at an arm's reach.

I ended my night at the same crummy Mexican restaurant just down from my hotel drinking a couple margaritas and eating a chicken tamale.

Today is another picture perfect day.  Monday.  The crowds will be back to work and on the highways.  I plan a drive up the coast along the Pacific Coast Highway.  North.  Malibu, then whatever.  Mondays are always Mondays no matter where you are.
Posted by cafe selavy at 12:17 PM