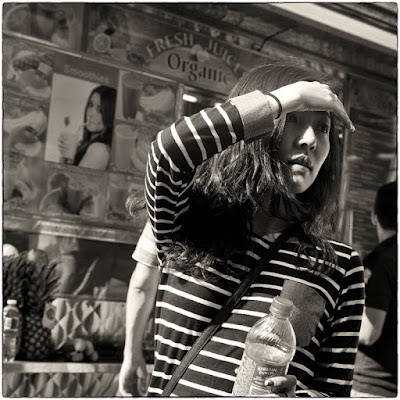 I don't know if people come to read this blog on the weekends or not, but I wanted to post this picture today.  I couldn't wait.  I really like it.  But I wonder, when do people come to this site?  Do they come every day or do they come once in awhile and read several posts at a time?  Do they skip weekends?  I don't know.  It doesn't matter.  The more I stare at this photo, the less certain I am anyway.  No, it doesn't matter.

Have you ever come home after work on a Friday afternoon and sat down on the couch, maybe put something on the television, then fell asleep sitting up until it was dark?  Disconcerting, right?  What do you do then, coming to in that somnambulistic state, unable to consider going anywhere, knowing it is too early for bed?

I thought I was well, but apparently, I am not.  I woke this morning with a belly full of grief.  I think someone is poisoning me, but I can't figure out how they are doing it.  I have barely eaten.  Maybe it is something they put on the rim of my coffee cups and glasses.  For what reason, though?  Who have I offended?  Who have I wronged?

But it need not be a real offense.  Any imagined one would do.

After waking in those hours between dozing on the couch and bed, I watched a ton of Bill Burr videos on YouTube.  There is an entire world of information and entertainment I am not part of.  There were interviews on internet shows, podcasts, and really bad videos of live performances.  I felt as if I had stumbled upon a cult watching them.  Joe Rogan was part of it.  People tell me I should listen to his podcasts, and I am taken aback.  Really?  You think I should listen to Joe Rogan?  They think he has interesting things to say.  And again, I'm like, really, Joe Rogan.  I had the same reaction last night when I saw him with Bill Burr.  It diminished my enjoyment of Burr by degrees.  Nothing he said was as funny afterwards.  He looked more the knucklehead than he did before.  The whole internet t.v. show thing looked hideous.  I felt I was watching "House of Idiots."  It was shocking, I guess, to run into that world full bore.  I had been neither prepared nor inured.  It was like stumbling into a Scientology meeting when you were looking for a Bingo game.

What does one do on a Saturday with a belly full poison, limbs heavy, mind dulled?  I'd eat some opium if this were truly a free country.  But it isn't.  Most of the things I like are illegal or severely frowned upon.  Perhaps I'll go lie on my mother's couch and keep her company watching t.v.  She would like that, and there is little else for me to do.