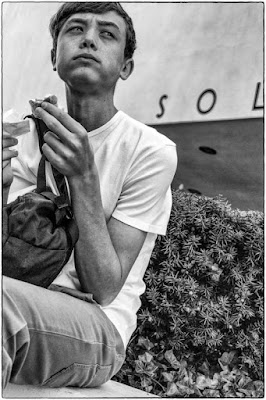 Jesus--you all must think I'm a dick!  Something must have changed in the settings for this blog because I used to get notifications of comments that were waiting to be approved.  I hadn't for a very long time, and I thought everyone was just tired of me.  I felt blue about it, but people have lives and maybe my schtick is getting old, etc.  Yesterday, I went into the settings of my blog and saw that I had any number of comments waiting to be published from months back.  I approved them yesterday.  Now I need to go back and respond.  I'm sorry.  It wasn't my fault.  I'm very appreciative of the correspondences.  They mean something to me.  Try again.  I want to see if I the changes I've made will bring notifications back to me again.

So. . . yesterday was day two of Blissful Me.  I walked to the park, did my outdoor exercising, ran a little farther than the day before, and then in the late afternoon, just before going to my mother's for dinner, I did Yoga for Adrienne. . . uh. . . I mean "with."  I was better at it than I was the day before.  It still hurt, but not as much.  Tonight I will up my game and go to Yoga for Beginners instead of Yoga for Complete Beginners.  Yea, buddy.  A few days of that and I will begin the 30 Days of Yoga series.

I only tell you this so that I can write about my shame later.  I have to have material.

But I stayed on the diet routine, though there seems no evidence in the way I look.  Maybe my face is sweeter, but my belly is still its jolly round mound of ugly.  No worries.  Fortitude.  And if I cut back the drinking, god knows.  Eating bark and twigs should have a positive benefit sooner or later.  Dividends.  I shouldn't say that, though.  I am eating vegetables and grains and protein.  Lunch was two eggs and an avocado.  See.  Of course, I finished off at the Cafe Strange with a mimosa or two which culminated in an early afternoon nap.  Such is the life of old men.

At my mother's later that day, I decided I would be manly and turn on a football game.  Dallas and Carolina was my only choice.  I tried.  I really did.  But I couldn't do it.  It used to be fun, I think, to watch a football game.  It must have been because I did it pretty much my entire life.  Well, I say that, but I haven't really watched for many, many years.  There is less football than commercials, I am certain.  Watch a couple plays then get blasted by some jackaroo shit.  Even the halftime highlights sucked.  I couldn't follow what the brain-dead commentators were saying.  I gave up.  What happened?  I guess it follows that we have to suffer something if we are going to pay players between half a million and a million dollars a game.  How did that happen?  And once they got that much money, we decided that they were smart and we started interviewing them and then they took themselves seriously, not as physical specimens which they are, but as thinkers.  Oh, boy, they think about things a lot.  I most interested in their political views.  Some real analysis there.

They should put Terry Bradshaw in a clown's suit on a drunk tank seat.  Dunk tank, I mean.

Watching the NFL reminded me of all that went wrong in America.  Hyper-everything.  'Roided,  Jacked, and Overblown.

I can see why all the hipsters prefer soccer.

After dinner, my mother and I watched a "60 Minutes" segment on polo pony cloning.  That was fascinating.  A fellow in Argentina cloned his favorite horse, and now he has about 100 of them.  All the horses he rides in his matches, and he is the best polo player in the world, are clones of that one horse.  His rival, the second best player in the world, is also Argentinian and is against the cloning of ponies.  The piece culminated in a match for the world championship between the two players' teams.  And it turned out to be a classic match with the score tied at the end of regulation. In overtime, the clones won.

Leslie Stahls asked the scientist responsible for the cloning if they could clone a human.  "Yes," he said.  He had been asked to do so by some of the richest people in the world.  Immediately I thought they should clone the two polo players.  Truly, I have never seen two handsomer or more assured men.  They made me want to kill myself.  But you know somewhere in the world, they are cloning people.  I thought about it, thought about which of my lovers I would clone.  But they would all have the same personalities, and I decided against it.  Everything would eventually turn out as it did the first time.

Would you buy a Marilyn Monroe clone?  How much would you pay for that tragedy?  But it is possible.  Well, if we have any of her DNA it would be.  Maybe you'd prefer a Cameron Diaz?  Or whomever.  I guess we'd all like another Cary Grant.  Yes, that would be good.

Jesus.  I'll bet Trump has had himself cloned somewhere.  This is the horror show.  Movies will be made about trying to kill all the Trump clones.  Here's a script possibility, kids.  Any takers?

I just want a wooly mammoth.  They have the DNA.  Bring back the Mammoth.

Sooner or later, if I go to China, I'm sure I'll finally get my Flying Monkey.  Who hasn't longed for one of those Flying Monkeys?

The Lakers, it is reported, have already begun cloning LeBron James.  In twenty years, they will field an entire team of James's.  Hear that Jordan?  Here's your chance to find out who is better.  LeBron Clone vs. Jordan Clone.  Hell yes!  Who is not down with that?

I'm up too early this morning, but what can I do?  I will be sleepy by noon.  Hell, I'm sleepy now.  But I am being productive, doing rather than sitting, reading rather than watching t.v., making pictures instead of moping.  There are just a few more things to do to get on with a new life.  Just a few.
Posted by cafe selavy at 7:10 AM