What About Mother Teresa? 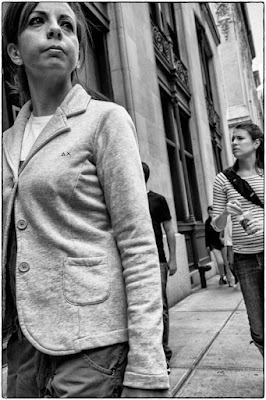 I don't watch tennis.  I'm not against it, it just doesn't interest me.  It never has.  I would rather watch a tennis match than a golf tournament, of course, but that is saying little.  I did watch the Bobby Riggs matches with Margaret Court and Billie Jean King, but that was all spectacle and not about sport.  It was a social engagement.

So. . . I wish I'd seen the Venus Williams/Naomi Osaka match.  It has become a cultural touchstone.  I can't turn on the "news" without hearing important people opine.  It was not about the sport.  It was about race and gender.  That's what they say.

And, of course, those arguments are predictable.

But this one got me (link).  You can skip ahead to minute seven of the clip if you like.  Watch it now.  I'll wait.

Holy shit!  Right?  When you become a parent, you become holy, for Christ's sake.  I mean, sure, I get it.  Hitler didn't have children.  See?  Oh, he may have had a rumored child, but nothing more than that.  Morality comes with parenthood.

But wait!  Trump has children.  Lots of them.  And he is proud of his daughter. . . one of them, anyway.  I wonder if Touré would say the same about him?

The other thing about the segment that bothers me is that they never mention that she was getting hand signals from her coach, and that is not allowed.  But like Clinton, she must wonder about what the definition of cheating is.  If you get hand signals from your coach and then say you are owed an apology because you have never cheated and would never cheat because you have a baby. . . .

But sure, I get it.  The other things trump this.

I find the argument shoddy at best.  But what do I know.

It is important to say that Venus Williams was a real champ when she told people to quit booing Osaka.  She wanted everyone to know that even Osaka would benefit from this in the future.

I don't know if Osaka has any children.

I won't link you to the Martina Navratilova opinion piece in the New York Times.  Oh, O.K. (link).  I am not saying she is right.  I think it is the result of the inevitable generational thing.  And, of course, Navratilova doesn't have any children which sort of negates her argument right away.

Enough of that.  I stand accused.

And I am guilty. . . of hoping that the big-assed hurricane doesn't come near my own hometown.  That means I'm hoping it goes somewhere else, and that can't be good for my karma.  But what do I do?  Hope it goes into outer space?  We are all screwed, though.  Climate change is already causing hunger as crop production drops.  What do you think that is going to do for world peace?  And Trump just made another big change in the environmental laws allowing for more methane to flow into the atmosphere.  Invest in gas companies, my friends.  Maybe you'll have enough money to buy the last scraps of goods.

Wait!  What happened to my Yoga Bliss?  I did my practice again last night, but I didn't feel as happy afterwards.  I went up a notch and didn't feel comfortable.  I mean, it hurt and I felt like a crippled wimp.  I am getting fatter, I think, even though I am not eating.  My belly has taken on a life of its own.  I guess I'm not feeling as groovy today.

Well, I was told by another yoga practitioner that I would have my ups and downs.  I guess so.

But what about Mother Teresa?  Jesus, I hadn't even thought about that!
Posted by cafe selavy at 7:55 AM