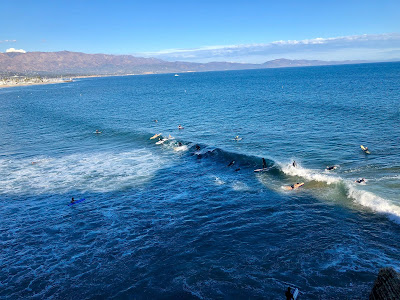 Mondays are Mondays everywhere, no doubt.  They feel the same, have the same sameness about them.  Monday nights out of town feel the same, too.  Places are empty.  Places are dead.  And so, here am I, packing for my Tuesday morning flight.  And writing this now, as I know I will not have time to do shit in the morning.  Well, I'll do a shit, but. . . . .

When I got up this morning, the sun was shining and the air was cool, a perfect SoCal day.  So I packed my cameras and headed out for Santa Barbara on the long route.  I thought that there was a Pacific Coast Highway from San Diego to San Francisco.  I would have sworn to you I have driven it before.  But I hadn't.  And I was wrong.  There is no PCH in L.A. or anywhere north for many miles.  I tried.  I swear I tried, but roads kept ending and turns kept turning, and then I was in some oil field and cabbage patch in the middle of nowhere.  Thank god I had the presence of mind to grab my camera and make a record of the moment.  I did not think to use my phone camera, though, so for now you will have to take my word.

I did manage to stop at some of the famous beaches along the way, though: Topanga Canyon and Ventura.  I stopped at the old Chouinard Iron Works building where everything started that became the travel accoutrement business.  The shed was there, but nothing more.  Next door was a Patagonia store, but it was no different from any other you might wander into, young kids selling stuff to old people who remember when it was cool to wander into the wild.  I drove by the compound where Chouinard lives now with his billion dollars, I think, a colony on the beach made up of high rollers and movie stars, walled to keep the peasants out.  But hey. . . he still does god's work. 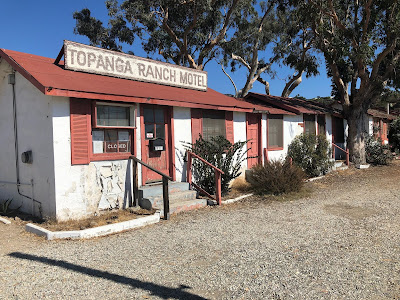 Finally, somehow, I ended up in Santa Barbara.  Oh, my!  I hadn't been there before, and I was knocked out.  It is truly the most beautiful city in America.  If you haven't been, go.  See State Street, but don't stop there.  Wander around.  Get lost.  End up at the most gentle beach in California.  I did, and I am happy and glad.  The light in Santa Barbara is the most perfect light in the world.  Take it from someone who would like to be a photographer.  Gimme, gimme, gimme.

But you need God's money to live there.

I realized today that since I've been here, I've eaten nothing but fish tacos.  It's alright.  I don't spend money on dinners eating out alone, and fish tacos are good.  I had three of them for lunch today with a cold Modelo draft.  Fish is good for you, and the tacos have all been good.  I feel like a Mexican fisherman now, getting lean and strong and hard.  I don't look that way, but maybe a bit more than when I came.  But everyone looks better on vacation.

I went to the pier and I went to the beaches, and then it was late afternoon, and it was time to go.  I took Highway 101 back as it was the quickest, but it was also beautiful, more so than I would have thought.  The mountains and golden hills were on fire with the sun, and that morning, when I plugged my phone into the USB port, I found that all my music was up for play, so there was that.  All my life, I have come to California and driven its mountains and coasts listening to music and clearing my head.  Today, I found that there was much to clear in the old pumpkin, but driving and listening and looking and singing along was cathartic for me.  Many of the songs were from old California trips, and the emotions that raged within me were strong and they were wild.  Driving with music is a universal therapy, I think.  Nobody who does it is ever the worse for wear.  The swerving road, the steep canyon walls, the golden grass, the fire of the sun, and music.  I was Jesus beautifully mad with it all and wished it would always be like this and never, ever end.

The sun was setting just as I got back to L.A.  And I wondered--should I eat?  I was still full from the late lunch, but I did not want to go to bed hungry.  I thought about where I could dine.  But it was Monday, and nobody was out, and the food would all be old and bad no matter where I would go, so I got. . . this. 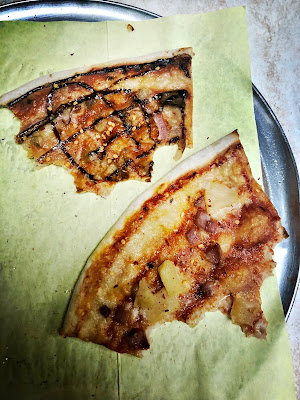 A romantic dinner for one in a New York Pizza at a dirty table under bright, fluorescent lights, alone.  Just me and the guy who ran the place.  We talked.  It was O.K.  It didn't last long.

Now I am facing reality again, an early morning wake up, returning the rental car at an offsite facility and making it to the gate on time.  And then tomorrow night, I will be back to my home, back in my bed, and I will forget every epiphany I have had this week.  I know enough to know that.  That is how it always works.  Oh, one or two things will be remembered, but not for long.  Not for very long.  I have already had a call from the tenant complaining about the electrical wiring in the apartment, and an old girlfriend has been sending me mean texts trying to spoil my trip.  When I get home, it will only be worse.  But I will have had this, and it will do until the next trip which I don't plan to be very far away.  Since I came out with no bar, I had to buy all the bottles I drank, so know how much I I've consumed.  It is shocking.  There will be that to contend with and an exercise regime that I will not reveal to you now.  As always, my plan is to be fit and lithe and handsomer than others, but that is a dangerous if not disastrous bet.  Still, it is that or bust.

I am a dreamer in a realists world.  It doesn't work so well very often, but when it does. . . fuck off, you idiots, look who has come to town!