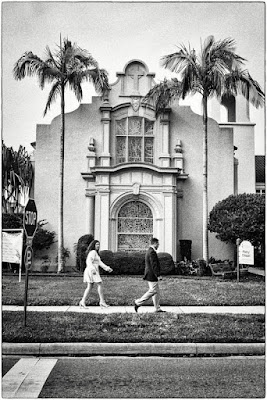 I haven't been taking many pictures lately, of course.  My mother and Ili did, but I have not looked at them.  I didn't even look at my injuries.  The first time I stepped out of the shower in my own home (which was long after the accident and operations), I was depressed for days.  I am better off an ostrich.  Look away.

But I have taken to carrying light film cameras, a little Yashica Electro CC or a Canon Canonet Q 17 iii.  They are easy to carry and easy to use.  I just pop pictures during my walks or when Ili is driving me somewhere.  I never know what I have on the roll when I take the pictures to the photo lab.  And there is usually nothing there of any interest, even to me.  But sometimes there will be something like this, a dad and daughter (I assume) walking by a palm-fronted church on their way to a Sunday service.  I don't even bother scanning the negatives now unless something looks good enough to print.  I let the photo lab do it.  The images are good enough for showing in the virtual world.  I wouldn't mind printing a small version of this, though, so I will eventually scan it on my own.

On Christmas Eve, my mother came over for the traditional pajama party.  I grilled steak and lobster, both of which came out perfectly.  The aroma of the grill must have called to the neighborhood animals, and I ended up with a new cat friend, a little black and white which I am trying to convince Ili is not the one spraying our trash can.  A bit later, a little white spaniel showed up on the deck.  I knew it was the neighbor's, but I didn't know which one as several people have ones that look just alike.  I opened the door and she came into the house.  Ili wants a dog badly and was as excited as if I had given this to her as a present.  It was the sweetest, loviest, most aristocratic and well behaved dog you could meet.  My mother held her in her lap for the longest time, and the dog, Shelby was her name, sat comfortably and calmly with the occasional appreciative "kiss."  I looked up the number on her tag and sent a message to the website that I had the dog, but half an hour later no one had called.  I wasn't sure if the dog was a vegan or not, so I tried a little of the buttery steak on her.  She seemed to like it fine.

In a bit, the neighbors were in their yard, so I called to Shelby to follow me which she did with sweet, obedient aplomb.  By the time I got to the neighbor's (I am slow, remember, still gimpy with injuries), they were inside, so I rang the doorbell.  Shelby sat and looked at the door in anticipation.  And indeed, she was their dog.  The neighbor's a very nice people, an attorney and an anesthesiologist who have a daughter I watched grow up and become a pediatrician and a mother of what seems to be a number of children.  The scene inside the house looked like something from a Steve Martin movie, "Father of the Bride," or "Parenthood."  You know, the sort of movie that makes your life seem so crummy.  Little kids in designer pajamas, a Christmas tree decorated by professionals, the smell of food cooking, everything glowing in a golden light.

I almost felt. . . well, almost.  But only for a bit.  I went back to the house, washed my hands, and began to serve dinner.  We had our own golden light and melted lemon butter and a wonderful bottle or two of wine and a teak cabinet full of liquor and tons of Christmas deserts, presents under the tree.

And I thought about the other neighbors in my moderately successful neighborhood.  A divorced professor across the street.  A divorced surgeon on the other side.  A divorced orthodontist next to him.  A sad family of trust funded drug addicts.  A divorced business woman whose house is for sale. What were they all doing tonight?  It wasn't all Steve Martin.

I like the season, but I find Christmas Eve and day too much.  I am not very good at commitment or obligation, but there they stand, eternal.  We had the usual cocktails with the usual losers and miscreants.  Watched the usual movies.