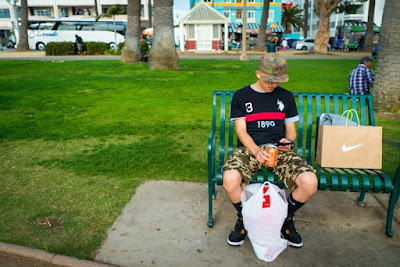 After awhile, I get tired of black and white.  Not other's, just mine.  Since I've been looking at Martin Parr images lately, I chose one that reminded me of his in some way.  Not as good, but you know.

I watched a Rick Steve's show this morning.  Romania.  Wow.  The show was produced in 2016, so I am sure it still looks the same.  Out into the country and you have stepped back in time.  Would I be able to photograph that?  It wouldn't happen in an hour or a day.  You'd need time.  My friend Jan in Berlin should go.  He would capture it beautifully and weirdly.  Go, Jan.  What else do you have to do?

He's already been, I'm sure.

What do you think of Garden Clubs?  Should I try photographing a flower show?  I never wanted to be an events photographer, but now I'm not so sure.  Who joins a Garden Club?  You know what I mean.  Oh, it could be glorious.

That's what I have instead of Romania just now.  Well, I don't have that, either, but it is more accessible.  If I'm afraid of photographing a Garden Club, what chance would I have in Romania?
Posted by cafe selavy at 12:00 PM