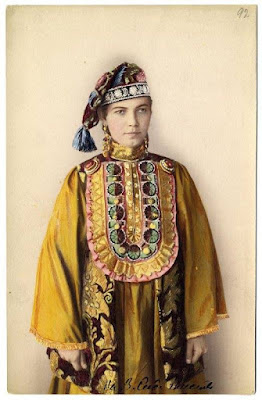 This is a photo from Russia in the late 19th or early 20th century.  I found it on the internet.  A bunch of them.  It reminds me of what I wanted to do in my studio when I got it.  Looking at these Russian photographs, I'm reminded that I still want to make photographs that look like this.  They are the most beautiful things.  The project I began so long ago was a take on old anthropological photos from this era.  My contention was that they were not accurate portrayals of what they meant to expose, that is "other cultures."  So I just got some exotic looking things and made up my own exotic cultures.  You may remember.  They were done with the old Polaroid film.

I'm sure I'd be criticized now for cultural (mis)appropriation or something worse.  We live in accusatory times, in an accusatory culture.

I read a story today about some "white people" who opened up a "Chinese" restaurant called Lucky Lee's in Union Square (link).  They claimed the food was healthier, cleaner. . . or something like that. No gluten, no MSG.  Well, they got flamed on social media and are trying to make amends.  Haven't people learned anything?  Can you imagine Trump apologizing for being culturally insensitive?  This restaurant is doomed, I'd guess.

I haven't eaten at a Chinese restaurant since I came back from a trip to China over a decade ago.  I think that makes me guilty of something.

Maybe I could make a series of pictures of the staff of the so-called "Chinese" restaurants.  I could publish their health department ratings on the bottom of each photograph.

But I have gotten very paranoid about food.  It is wondrous to me that I used to eat out all the time and would eat just about anything.  Food prepared by others in restaurants looking to maximize profits seems, well, dirty and unhealthy.  It's bad enough what they do to food at the grocery store.

God, I wish to make those photographs.  I'll be posting more, for sure.  They are wonderful.
Posted by cafe selavy at 8:52 AM