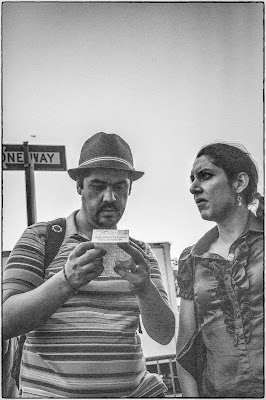 I keep waking at 4:30 a.m.  Not that I really sleep.  I sleep for bits, then wake in pain and roll into one of the three positions I can stand. . . for a short time.  Some mornings, I lie there until I go back to sleep just before dawn.  I tried today, but that didn't work, and I got up after a bit.  Made coffee.  Read the papers.

Yesterday was a hell of a day at the Kentucky Derby.  I wouldn't have wanted to be one of the stewards for that race.  There was going to be no pleasing decision there.  They did what they had to do.  Whatever they decided would be wrong.  I think they should have run the race all over again.  Not all the horses, just the ones affected, the front runners.  That would have been the only fair way to decide things, of course, but the horses would probably have died from the effort.  They had no ideas of disputes or disqualifications.  That's the funniest thing.  Besides, why can't the horse in the lead choose whatever path he or she wants to take?  What's the point of being in the lead?

Glad I didn't bet any money.  I picked my trifecta.  It was all wrong.  That's why I don't wager on anything but me.

I got into the pool yesterday for the first time since the accident.  If I fell out of a boat, I'd drown.  Wow.  I didn't know how horrible my shoulder really was/is.  I will start going to the pool and try moving about.  Maybe one day I'll be able to swim again.  I don't know.  But it would sure be spooky to get into the ocean and worry about getting knocked down and sucked into deeper water.  I won't.  And that's a drag.

The day got worse, though.  I was looking through movies last night on my Fire TV, and came across some cop movie with Mel Gibson and Vince Vaughn that is about a year old.  All the drunken sleaze balls are in it.  Don Johnson, too.  What depressed me was Mel Gibson still running around playing a cop.  He can move both arms and everything.  He is doing o.k.

I decided to watch something else, an old movie, "Hank Williams: The Show He Never Gave" (link). I'd seen it long, long ago, and I enjoyed it this time, too, though it was a little too depressing for my mood and probably disturbed my sleep.

Maybe that's why I woke so early this morning.

The morning is grey.  I may take a walk, or I may go back to bed.  My fate, as always, lies in the direction I choose.  I'll try to choose wisely.
Posted by cafe selavy at 7:21 AM