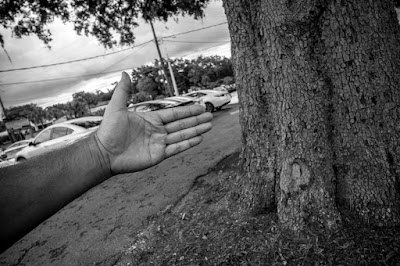 I was trying to test out a flash with the Monochrome and the wide angle lens.  I couldn't get it it fire, but I found this image to have that certain je ne sais quois.  That's French for "I don't know what."  People use it to mean "flair," I believe.  But it is just admitting a certain stupidity about a thing.  I really believe the photo has that quality.  I don't know what.

But I got the flash to work with the camera now and I am a pain in the ass with it.  You'll see some examples in the near future.  I am flashing everything and everyone.  I'm trying to make some Mark Cohen--style photos.  They are not turning out that way which is probably good.  They have my own mark and smell to them.  First you copy, then. . . je ne sais quois.

I like the phrase as much as esprit de corps and Viva Las Vegas.

Last night was the full moon, I hear.  Couldn't tell it here.  Rain.  Still, the weird dreams and strange sleep evidenced it.

Now for the factory.  Only a week before S.F.  I got some good advice for the trip.  Pack half the clothes and take twice the money.