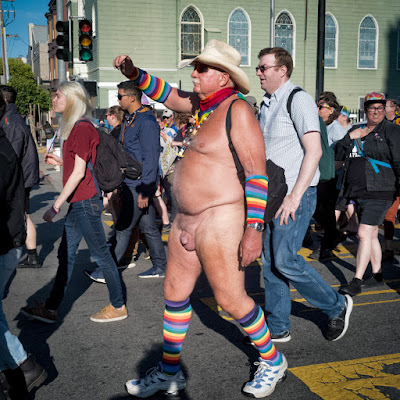 I'm back from Cali.  We were in S.F. for the big Pride Parade.  Boy, was I surprised.  My own home town has a larger gay population per capita than does S.F., but it is a different kind of gay.  We are sort of Disney Gay.  Pride parades here are big but not radical.  People wear t-shirts with rainbows on them.  It is all "family friendly" here.

San Francisco is another thing.  Women walking naked, men wearing nothing but ass chaps.  I'm not saying it isn't family friendly.  People bring their kids.  Just a different family.  I got so excited, I jumped right in.  Ili took my picture walking naked through the streets, living the dream.  I guess I've put on a little weight since the accident, but I think I look distinguished.

I kid.  We loved it.  People are the friendliest in "the Bay area."  As long as you are a vegan tranny.

I have to quit it.  It is a place for lovers.  We couldn't have had a better vacation.  We chilled more than we thought we would.  Went to S.F. for four nights, toured the neighborhoods, ate and drank like gargantuans, dropped hundred dollar bills like rain.  Then we went to Carmel for two nights.  Which became three nights.  Which became four.  Let me make a recommendation if you go--La Playa Carmel.  Best place for real.  It may seem expensive but every morning they serve a champagne breakfast with a chef.  All day sangria.  Good wine at 5:30.  And to top it off, fresh baked chocolate chip Ghirardelli cookies and milk at eight.  Terraced gardens overlooking the sea.  Complimentary car service, too.  Cool air and fireplaces.  We couldn't leave.

We decided to live in Carmel-by-the-Sea.  We checked the price on a little house we liked.  Seven million.  I guess we came too late.

Ili had her monumental birthday there.  Best day ever, she says.  The weather was perfect.  We walked Point Lobos, visited the otters and the seals and all the creatures of the forest and the tide pools.  Came back and snacked on fresh figs, bleu cheese, sourdough baguette, olives, and a local wine.  Dinner that night at an Italian restaurant, the oldest in town.  Two deserts.  Decadence.

I won't try to tell it all here.  I haven't thought much for the last ten days, not about anything real.  I've just been taking in the fairyland.  This morning, I'm back in my own home, cozy, lolling, and saying hello. 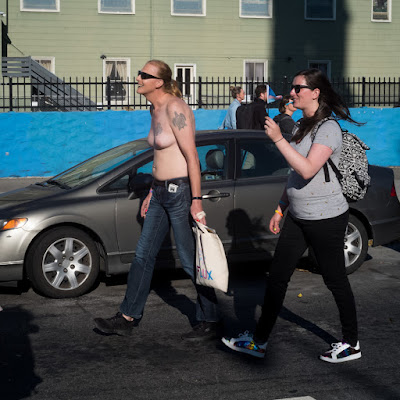