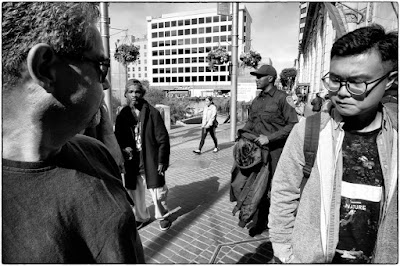 I shot this with the Monochrom and the 21mm lens.  I love the combo.  Wish I had used it more in S.F.  It just takes in so much of the scene that everything is juxtaposed.  Almost every picture is a story.  If I lived in S.F. or N.Y., I'd be a better photographer.  Hell, I'd be famous in a few months.

Maybe not.  But I'd certainly have more pictures that I enjoy.

O.K.  I am to report.  No matter how early you pack, there is much and more to do before you can leave the house.  And so we stressed.  But everything went fine.  We got to the airport early, got through TSA quickly, even with my metal ribs, and had time for a bite at one of the chain restaurants served by a definite they.  Drinks and a shitty steak, and then aboard.

We went as cheaply as we could.  Basic Economy.  I've never been in a more cramped, more humiliating seat in my life.  For five and a half hours, knees jammed against the seat in front of me, I twisted my body to accommodate the hump on the floor where my right foot should have been.  We both swore we would never fly economy again, at least not for any long flights.

But the flight went smoothly and we landed on time in S.F. late in the evening--for us, at least--having crossed three time zones in passage.  We got a Lyft into the city, to our hotel, the Hilton at Union Square.  I'd stayed there before.  It is a decent hotel, a conventioneers place, and it is well situated.  When we checked in, the nice young girl at the counter gave us an upgrade, so we had a 28th floor room with a balcony and a view of the city.  The room was nice and the evening was just beginning to spread, the lights of the city beginning to sparkle.  We watched the silhouettes of dancers projected on the top floors of one of the new buildings I'd never seen.  Then we went downstairs to eat.  Ili said she wasn't hungry, so I grabbed a hotdog and a bottle of wine at the deli.  Bad mistake.  I couldn't eat it.  We showered and went to bed hungry and a little drunk that night.  But the bed was comfortable, and we sank into a deep, long slumber, not waking until well after dawn the next day.