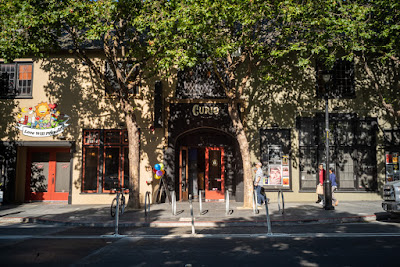 What is the point of a picture like this?  I don't know.  Can't even say why, but everytime I come across it, I pause a minute.  Shadows and light, I guess, and the lure of the greenery.  And it is a safe picture, the only kind. that doesn't get you in trouble any more.  As much trouble.

That show "Serengeti" is getting to me.  The show anthropomorphizes all the animals.  I think.  It seems that the animals DO have complex emotional lives.  Maybe they aren't anthropomorphized at all.  If we showed them drinking beer and eating Doritos, maybe that would be it.  But nature sure doesn't give a shit about the individual.  It is awful.  Maybe the kids should watch it.  Maybe they shouldn't.  I don't know.  Maybe only old people should be banned from viewing the ravages of the natural world.  It is terrible.

I am an old bull.  The young bulls want to run me out of the herd.  That f'ing show tells me it is inevitable.  No matter how tough you think you are. . . . 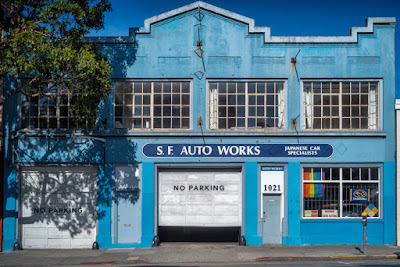 Maybe I'll just become a photographer of buildings.  It is akin to nature photography.   You know, the close up, big bokeh pictures of flowers or the telephoto shots of lions.  People like the sort of thing.  I'll anthropomorphize buildings.  They have faces already.  I'll give them a soul.  And like everything else, they will be destroyed, eventually, by man or by time.  There is a tragic sadness to it all that will have its own appeal.  Apparently we like that sort of thing.

I should quit watching "Serengeti," but I probably won't.
Posted by cafe selavy at 6:52 AM