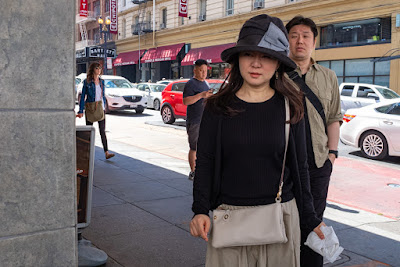 Ili was intrigued by Asian stylishness in S.F.  It was fairly ubiquitous and eye-catching.  I, of course, was in the usual jeans and t-shirt attire, a comparative bum.  It is my modus operandi.  It comes from being a lazy southerner, I think, from the tropics and not Charleston or Atlanta.  Flip flops and a t-shirt will see you through.

But I loved the Asian glamor.  I fear saying that.  Even a compliment seems modestly racist.  Of course, any generalization runs the gamble.

The country's concern with Epstein is telling.  It is more than a concern.  It is an obsession.  There will be docudramas, movies, t.v. series. . . .  People feel cheated of the courtroom drama, perhaps.  His death is not good enough.

Seriously, though, don't you wonder about people.  Who is that occult sex guru guy in the northeast?  The one that recruited the Seagrams heir?  Jesus.

But people need spooky shit.  Look at the movies that are popular.  People want to be scared by monsters and vampires and the world "beyond."  Ennui just isn't good enough for them.

Not me.  Nothing like a cocktail and a boring afternoon to keep me happy.  That and some good food and soothing music.  Art.  A good book.

I should tie all this back into the Asian stylishness, but I can't think of a way to do it, so. . . I'll just say that the weather is terrible here and you should be glad if you live elsewhere.  For now, anyway.  We still have months to wait.
Posted by cafe selavy at 7:58 AM