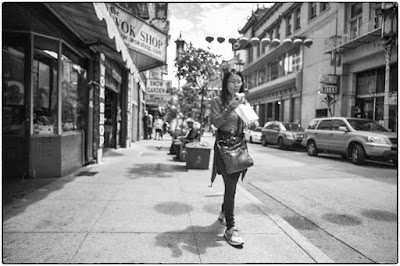 First, let me say this--for some reason, I can't respond to comments left on this site from my new laptop.  I don't know how to set up accounts, perhaps.  I don't think Blogger recognizes me as the owner of this site.  But it lets me make new posts, so I don't get it.  Anyway, don't take offense when I don't respond.  I'm trying.  Let's let the computer whiz kid, Q, explain it to me.   All he will ask is that I give him control over this blog.

I had to take off work yesterday.  Ili wanted me to accompany her to a procedure, but before that, the insurance fellow had to come to the house to give me a check for my crushed Vespa.  After Ili's procedure, I had to take an attorney's letter to the roofing company that is not responding to my calls. The ceiling and walls have been destroyed in the bathroom. and bedroom by rain.  I had never been to the roofer's office before.  It was a sort of roofing junkyard in a very bad part of town.  "Beware of the
Dog," Ili read just before I got out to walk through the gate in the hurricane fence.  "I'll wait for you in the car."  I thought that brave of her, considering she was exposed on the street.  I stumbled through the rubble with a wary eye, but there was no dog encounter forthcoming.  Inside, the office looked like the junkyard I'd just walked through.  Three women sat at old, beat desks, each pointing to the other as I tried to deliver the letter.

I got a call within the hour.  Someone will be at my house this morning.

After that, I had to rush to meet my mother at the Ear, Nose, and Throat center.  She had an issue with swelling under her tongue which I guessed might be a blocked salivary gland, but it kept hurting, so she went to a walk-in clinic where a doctor told her she needed to see a specialist.  "I'm not that kind of doctor," he told her just before he said, "I'm not saying it is malignant, but I can't say it is not."  My mother went to her primary care doctor two days later who told her, "I don't know what it is.  You want to see a specialists?"  After which, she didn't help.  I called and made an appointment with an ENT center.

When the doctor came in, I almost fell out of my chair.  I think I've commented on how handsome all the doctor's at the hospital have been, haven't I?  They look like they came from Hollywood casting.  Well. . . so did my mother's doctor.  She looked about twenty and wore cowboy boots with her sleeveless dress.  Jesus, she was a real knockout.  What's up with this?  Do all doctors look like fitness champs now?  Is it some drug they are not telling us about?

Turns out, I was right about the salivary gland.  My mother is fine.

From the docs, I had to fly to the attorneys' office about my accident.  Needed to sign some papers, etc.  All I have to say is no amount of money is worth going through what I've been through, but these people have been swell.  I must have been in dangerous shape as they all were just glad that I was alive (let alone ruggedly handsome, etc.).  And after all the niceties, I know that I will owe nothing of the millions of dollars in medical bills.  I have been very, very worried.

To wrap up the day, I spoke with the electrician from the company who put in my two new air conditioners.  They came out a month ago to give me an estimate on putting in new electrical boxes, but I haven't been able to get an estimate from them.  Got it.  Such things are not cheap.

No matter.  It was a full and productive day, and to celebrate, Ili and I got take out seafood from a local restaurant and dined in style at home with a good wine and a lot of talk.  But today, I am back at the factory.  Don't take days off.  The work never goes away.  And now, there is much to do.