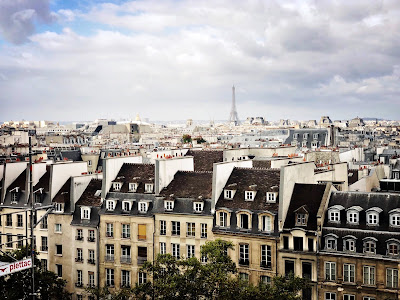 We woke to rain and were grateful that we had an apartment with coffee and croissants and lovely places to lounge.  It would have been a terrible day to be cloistered in a hotel room, we said as we watched the parade of umbrellas walking along the Seine.  So we lingered for a couple hours until the rain cleared away, then we wandered out across the bridge to the Left Bank and walked toward the Eiffel Tower.  For those of you who know Paris, you will realize how distorted my very old mind-map of Paris was, but it led us on a lovely walk through winding, narrow streets, down cobbled alleyways, past specialty shops, through all that invokes old Paris.  Iliana was, as I had hoped, enamored.

Soon, we were hungry and stopped in a small restaurant and had some wine and a French Burger.  I don't remember burgers on the menus from my previous trips, but now it seemed they had taken over the city as have American tourists.  Almost everywhere we went, people spoke English.  As I remember, they always were able but wouldn't.  Now, it seems, they speak everything.  I can read French much better than I can speak it, but I know words and phrases and can even make complete sentences sometimes, but every time I opened my mouth, Spanish came out.  "Lo siento," I would say, or "Con su permisso."

"Why do you keep doing that?" Ili would ask me.

I felt myself a dolt compared to the cosmopolitan speakers we encountered, but everyone was very nice, a contrast to the old stereotypes which from my experience held some truths.  It didn't hurt to have Ili with me, of course, as people tend to smile at her anyway, and the contrast between the two of us couldn't be greater.  Yes, I'm sure people were nicer to us because of it.

After lunch, we wandered back across the bridge through the courtyard of the Louvre where people posed ceaselessly for pictures in front of the Pyramid.  Instagram.  The Asians were the best posers, we decided, and the best dressers, relentless and unafraid.  We admired them.

We made our way to the Champs Elysees which Ili cared little for after the beautiful winding streets of the Left Bank, then to the Arc de Triomphe.  Down the tunnel under the street emerging at the base, Ili wanted to see the view.  O.K.  We entered through security and then. . . horrors!  I hadn't thought about being crippled until faced with a winding spiral staircase.  Oh, shit, I said.  Well, we'd see.  Ili looked concerned.  Nope, I said, I'm fine, and off we went.  I don't know if there is some permanent damage in my left lung as I haven't been to a pulmonologist, but breathing when exerting myself becomes very problematic.  In the old days. . . yada, yada, yada.  But this isn't the old days, and you take what you can get.  I'll admit that Ili took my pack, but I don't think she needed to.  I stopped once or twice just to see how I was doing, but we made it to the top without slowing people down.  It was fine.

And stretched as far as the eyes could see was Paris.  The view was as fine as we had read, arguably the best in the city.

We made our way back to the apartment in the fading light making our first sojourn to the metro.  Back at the apartment, having walked from noon 'til dark, we collapsed.  A bottle of wine, a loaf of bread, some cheese, and an order of frog legs that Ili picked up at a cafe near our place.  We were in for the night, exhausted and happy.

I couldn't have walked another block.  Showers and fresh linens and sleep.