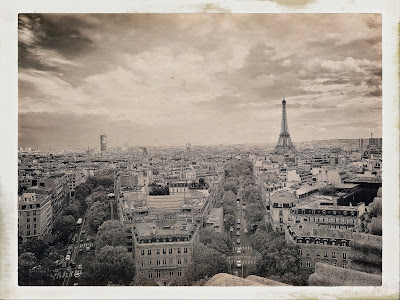 Let me begin by quoting from an article in yesterday's N.Y. Times:

“It always surprises me with this task that creativity takes a back seat to most other traits, and this pattern was repeated in our large cross-cultural comparison,” researcher Andrew G. Thomas tells . “Highly successful creative individuals, such as musicians and artists, are often highly desirable mates, but maybe what’s actually being valued here is not creativity as such but the social status that accompanies it.”

We made our trip across the Atlantic like champs, driving four hours to the distant airport, then eating a flatbread and two orders of spicy wings and drinking two rums and two beers.  We were ready.  Of course we flew "Zone Five,"  and you know what that means.  It's how you get cheap tickets.  Zone Five.  But it's o.k..  We were allowed to board the plane after everyone was seated and sipping their champagne.  We bumped our way to the back of the plane and squeezed/fell into our 29.5 inches of seating.  Nine and a half hours of air time.  We watched the Air France safety video (link) which put me in a very good mood.  I felt like I was flying in the good old days when aesthetics were different, a thing.  Later, when we were under way, as they say, they brought us our champagne, too.  It wasn't a bad champagne and they were kind and brought us some more.  Then there was a light supper that wasn't objectionable, then the pills that keep you calm.  I woke from time to time in a panic/rage at not being able to move, knees tight against the seat in front, metal arm rest separating ribs eight and nine, but I was out for the most part until we landed in Paris.

It was a rainy day.

Our apartment was not ready.

We went to lunch on the Ile St. Louis.

And then. . . we were home, or what would be home for the next week. 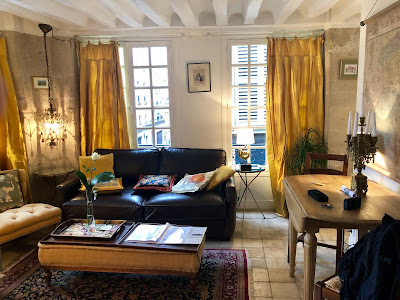 Home was a lovely pied a terre directly behind the Cathedral de Notre Dame.  We had a kitchen, a living room, a bedroom, and a bath.  Our windows overlooked the Seine River and the Hotel de Ville directly across from us on the other side.  The building was 17th century with hand carved ceiling beams.  It was out of a good film, owned, we were told later by Freddie the Singing Waiter (more on him another time) by Americans who were famous for arranging dinners between Macron and Trump.  In the streets surrounding us were all the cafes and restaurants and brasseries we would need.

Ili is wonderful at organizing things and she soon made the apartment our own.  We had decided, of course, not to nap but to head straight out into the streets.  We would sleep that night.  And so. . . we descended the one flight of stairs, opened the giant wooden door that people were often posing by for pictures, and turned the corner bordering the cathedral.  I, of course, had camera in hand, and from the hip, I shot my first picture, a street sweeper.  It was innocuous, nothing.

But he went mad.  I told you this would happen, that I would likely end up in jail.  I tried to ignore his calls, but he followed us down the street.  I would never have paid attention to him, but Ili turned around and told him I hadn't taken his picture which I am sure she believed was true.  He was a big, young African Arab and he would not leave us alone.  As he wouldn't relent, however, my blood, or what I have left of it, began to boil, and I turned angry and stepped toward him.  I said some very true things that put him on his heals which thrilled me as it seemed I would escape a beating at his hands, but Ili was not as thrilled as I.  I could tell by the look in his eyes that he was ready to move on, so the angry man said his final words and left us alone.  But the awful slime of the event stayed with us.

I had already spoiled Ili's trip and we hadn't been on the street for five minutes.

Refer back to the N.Y. Times quote.

That, my friends, was the end of my Paris street photography adventure.  I couldn't chance another encounter with Ili there.  It is o.k. for me, but it is too hard on her.  And not fair.  We came to Paris together for love and happiness, not street photography strife.  I put my cameras away, or at least never took another street portrait.  What you will see from my Paris trip will be buildings and monuments.  What tales you will hear will be sweet and funny, however, for we had a truly fabulous time.

But they were right.  Creativity is far down on the list of desired qualities in a relationship.  Lower, I think, than I ever imagined.