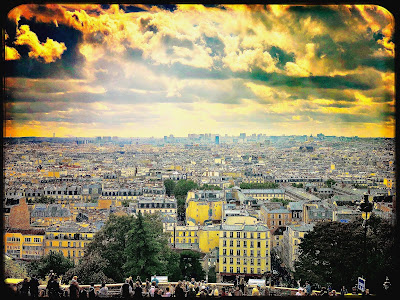 Seriously, unable to photograph people in the streets, I became enamored of my iPhone.  There are apps for photos that you can only get on it.  O.K.  So this one is a bit "overdone," but what the hell.  It kept me entertained.

We got a late start once again which was easy to do in such a nice abode.  We decided to go to Montmartre that day, but I needed to buy a new metro pass.  I had lost mine the day before somehow. No, not somehow.  I lost it because I am disorganized and cavalier and am sure I dropped it when taking something else out of my pocket.  It is typical of me.  I needed to spend 35 Euros more to get another, but, compounding my efforts, the first metro stop we came to was not a station and did not sell tickets.  Onward, first by foot, then by metro.  Almost.  We still did not know how to read the metro maps, so we stood on the wrong platform waiting for a train that would never come.  Half an hour later, we had it figured out.  We headed out on the M4 finally and got off at the Montmartre station.

Emerging into the street was not what I had imagined.  The station was in a shabby area of cheap shops and ugly buildings.

"Glad we didn't stay in Montmartre," I said as our original hotel choice was in this arrondissement.  We were at the bottom of the hill and right away were required to climb.  After a few minutes, we found some stairs and walked ever up past hotels and apartments, none of which looked appealing, up and up, my legs and lungs and sweat glands pumping, until we finally came to some buildings of "repute," ornate rather than mundane, decorated rather than functional, up and on up still until finally we were standing behind the Sacre Couer.  My clothing was soaked, but I was glad to be at last standing on the top.  We made our way around to the front of the cathedral.

That is when Ili pointed to a gas powered open train bringing passengers up from the bottom of the hill.  Somewhere else, I remembered, there was a funicular.  Oh, well, we were there now and in better shape for it.

We had nothing but time, so we got into the line to enter the church which Ili claimed was 2,000 years old.

"Yes," I said, "this has been a sacred spot since Roman times, but this cathedral was not here."

Ili is a good sport and we had great fun with that.

Signs are posted everywhere upon your entrance declaring, "No Photography," so, of course, everyone was snapping away with their iPhones.  Not I, however.  I paid a tithing and lit a candle, as did Ili.  Heathens of a Sacred Type, I guess.

After the cathedral, we made our way into town and found the Montmartre Museum, a building where Renoir most notably had a studio and painted.  The museum itself is rather kitsch, but it was nice strolling the four floors and reading about the history of Montmartre.  In the garden, we had a cup of hot chocolate before making our way into town.

We walked by the house where Satie had lived, past the Lapin where Picasso ate lunch paying each time with a drawing, a place where both Satie and Debussy played piano. We walked past Picasso’s studio. We strolled through the winding streets of cafes and shops, the Montmartre of the Bobos, we read. Juli said it was very lovely.

We stopped in a cafe for lunch and drinks and watched the crowd stroll by, then walked the winding cobbled streets stopping in shops Toby some things including the best jellied fruit candy I've ever had.  Montmartre turned out to be truly lovely after all.

Now old metro hands, we decided to head back to our part of town, but we boarded the right metro going the wrong direction.  We got off at the first stop which was truly an awful place, then got back on track.  Back at the Ile de la Cite, however, we took a bunch of wrong turns getting back to the apartment which was only a few blocks away and did a big loop in the sudden rain that soaked us through and through.  Well, old buildings and flower stalls can fool you.  But wine and cheese and bread and dry clothes put us right, and after awhile we decided to stroll the Latin Quarter for a bit.

First stop was Shakespeare and Co. of course, but it was crowded in a crazy, hectic way unlike my previous visits there so long ago, and though the rooms are filled with books, I felt as if I'd read them all before, or at least the ones that count, but maybe I was simply tired.  I walked through the crowded rooms then came outside to sit in the tiny courtyard for a minute.  It was just too much.
We headed back away from the river through the winding, narrow pedestrian streets that were jammed with people and businesses. It reminded me of a circus or a fair. It was the sort of place that  intrigued me in my twenties and thirties but which held little interest for me now. Ili wanted to eat at one of the restaurants, but I was wary of places that had street hawkers barking you in. She wanted to get a cocktail, she said, and so we wandered on. We were both getting weary and a bit cranky and ended up in a shitty little hole of a place where we ordered two very bad drinks that we left sitting on the bar.

When we finally crossed back over the bridge to the tranquil island, we went to a quiet restaurant and sat at an  outside table, but you know how it is when things start to go south.  It is hard to turn that cart around. Dinner wasn't as fun as it might have been.  We were weary and I was old, I think.  I hadn't been up to partying in the Latin Quarter, or so it seemed, and it hung heavy on me.  I was doing my best, but the days were long and physical, and I was a man still trying to recover from the other thing.  A city can be tough on you, even Paris.

We made our way back to our apartment in the dark.