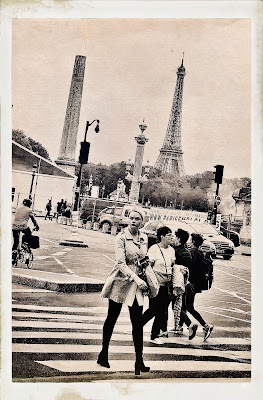 There is more Paris narrative  coming, but let me break a moment to reflect on other things.  Sunday marked one year since I was run over.  That is what I thought, anyway, but yesterday my mother told me something that has stayed with me since.  A friend of hers is the mother of a fellow I worked out with at the old muscle gym years ago.  My mother said that her son was sitting at a cafe having lunch when I had my accident.  He didn't know it was me, but he saw me go flying through the air, across the street and into the grass on the other side.

"It must have been landing in the grass that kept you from having a head injury," my mother said.

I never knew I went flying.  I don't remember anything but a white light and the words that went through my mind in that millisecond--"Fuck, this is really bad."

I must have been out a very long time, and now I worry about future neurological damage.  But the knowledge that someone I know saw me fly through the air is haunting.

After my first day and night in the hospital, I remember very little.  But I must have been lucid that night.  I remember the trauma center, remember the many doctors and the insertion of the chest tube while I was still awake.  I remember the priest coming and remember telling him, no, I didn't need a priest, and I remember making all my own phone calls on my cell phone.

They took me to intensive care that night.  My mother told me tonight at dinner that I was taken back again later because my lung would not quit bleeding.  I didn't remember that, either.

Ili is out of town, and I have been very lackadaisical this weekend.  I have been thinking about the accident, who I was before and who I am now.

Today I looked at Vespas on Craigslist.  I would like another, but I don't know if that is wise.

My friends and colleagues don't really know how bad it is, how much it hurts inside me still.  Many are able to joke about it as if it is a trifle.  I think now of all the people I have known who have been in car and motorcycle accidents who were either killed or crippled.  It turns out to be many.  My father was in a head on collision that crushed his chest, dislocated his hip, and put him in intensive care for a month.  When he came out, he was under regular care equally long.

I never knew how bad he must have felt, but I know he was never the same.

Tonight at dinner, my mother said once again that I was lucky to be alive.  I told her that I wasn't sure that I agreed.  It would have been easy to die then.  Living on at my age, that's the tough part.  But I agreed that I could have been hurt in different ways that would have been much worse.  I saw a quadriplegic in a wheelchair at the airport talking to his companions.  I couldn't look.

"That could have been you," said Ili.

I think a lot about death now, and I think about the things that I have done, the things I would like to do.  How much time will I have to do them?  Will I have the energy and ability?

I have not been eating enough lately.  I've grown fat, and walking through Paris for so many hours a day should have made me skinny.  I have barely eaten since coming home, though, and perhaps it has left me weak, both physically and otherwise.  Tonight, however, I made a big spaghetti dinner for my mother.  You have not had my spaghetti.  It is muscle-boy spaghetti.  Tonight I made an avocado and tomato salad and steamed broccoli and cooked up too much meat for the sauce.  I bought stew beef, so lean, and had it double ground.  I put some olive oil into the pan to heat, then dumped in minced garlic just long enough to let it open up.  Then I browned the meat.  Protein spaghetti noodles, the meat, sauce.  Dinner and half a bottle of Cab Saw later, and I'm feeling like my old self again.

Look at that picture of the woman walking across the street with the Eiffel Tower behind her.  It is almost good.  One take.  Boy, if I'd been Frank Horvat or William Klein back in the fifties, I would have been great.  With some Vogue or Harpers models and a little time. . . .

I pulled out my film Leica tonight.  It feels so good in the hand.  Critics applaud the Leica M10 for feeling like the old film cameras.  It does have the same dimensions, but I have them all, and I will tell you that the film camera feels much different.  It is lighter and easier to wield.  The electronics in the digital cameras just weighs them down.  I am going to begin to carry my film Leica again.  "This is real photography," it says to me.  Later, I will remember what a pain in the ass film is, but it is a love affair when you hold the camera in your hand.  It is like dating Audrey Hepburn.

I will get back to the narrative tomorrow, but this other thing has dominated my thoughts this weekend.  It is a good thing I was alone as I was when I got hit.  It is not something you want someone to go through with you.

Oops.  Having said that, I realize that I just dragged you along.  Apologies.  I'll try to be funnier and wittier in the future.
Posted by cafe selavy at 7:20 AM