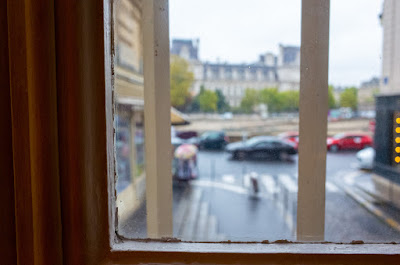 After shopping and eating on the Left Bank, we came home.  But not home, now.  Our minds were preparing for the trip back the next day.  Last evenings all have the same tone, the same meter.

We slept and rose and made our coffee, took our showers, packed the final things, and said goodbye to our Paris apartment.  We each rolled two suitcases down the alley and across the bridge to the cab stand several blocks away.  Surprisingly, you can't call or reserve a cab to come to your doorstep.  You must get a cab at a cabstand.  You may hire a limo, but that is another thing and costs more money.  I worried, of course, about fucking up and not getting to the airport on time, but the entire affair was easy and we arrived at the airport early.

Which turned out to be a good thing.

We stood in line and checked our bags and rolled our carry ons to the line for the gate.  After moving slowly through the barely moving line for what seemed a very long time, we were flagged by a fellow in an official looking jacket and had to go to another line where a man who smelled terribly weighed our things, shook his head as if in grief, and told us we would have to go back to the counter and check one of them. This meant crossing the airport to stand in the long line we had already gone through once again so that we could come back and stand in the line we had just passed through.

I won't recount the emotional ride that took us on since our early arrival left us time to spare.  We made it through, sat at a Japanese counter with conveyor belt sushi and ordered ramen soup and beers.  Then we shopped at the duty free mall that had some of the best high end merchandise we had seen on our trip all in one condensed portion of the airport.

Finally, almost the last to board the plane, we walked down the aisle to Zone 5 and took our tiny seats.  I had bought some travel bottles of booze and we settled in to watch two and a half bad movies, the worst being "Tolkien."

"Did you notice that the movie was in perpetual autumn?" Ili asked.

The other was fairly fascinating in a way.  I think the title was "Big Eyes".  It was about the woman in the early 1960s who became famous for painting those big-eyed children paintings.  Well, she didn't become famous.  Her husband who pretended to have painted them did.  I wasn't familiar with the crazy story.

They fed us something on the plane about 45 minutes before we landed. Weird, we thought, but the flight was bumpy, so perhaps they remained seated for safety reasons.  I am fairly certain we flew over a hurricane, the one that crossed the Atlantic and landed in England as a tropical storm.  I am told commercial planes can do that, but I haven't checked the facts.  Whatever.  It was bumpy.

We landed in Miami, and this is where things went screwy.  I hadn't reserved a rental car.  This is one of my trademark characteristics.  I play much by ear.  And, I thought, it would be easy to rent a car at the airport.

We had reserved a hotel room for the night, however, and had intended to spend the night and drive home very early in the morning.  We called to reserve a car while we were standing in customs, and the man on the phone said we could pick it up at 7:30, but when we got to the counter, we were told there were no more cars left on the lot.

So. . . new plan.  I went to stand in the long line at the Avis counter and Ili went to the short line at Budget.  She called me and said she was at the counter, so I abandoned my spot and joined her.  Half an hour later, we had a car.  By now, however, I didn't want to go to the hotel.  I was stinky and beat, and I didn't think I could fall asleep.  I just wanted to drive the 3.5 hours home.  We "talked" this over, and when we got on the road, I took the exit to the highway.  The decision was made.

When we got to the highway, though, all I could see were big balls of light.  Flying now does something to my eyes and they don't focus for a long while after.

"Hand me my glasses," I said to Ili.  These were my reading glasses, the ones for focusing about a foot away.  The road came into view.  These were what I had to wear for the entire drive home.  Perhaps I shouldn't have been driving, you might say, but I was one of the better drivers on the road that night. Cars were speeding up and slowing down and cutting in and out of lanes.  Semi tractor trailers were swerving off the highway.  It was nightmare dangerous out there that night.

But we got home safely, and within minutes had crashed into a deep sleep.

We both were due back to work in the morning.  Showers and coffees and breakfast sandwiches from Wawa were our entry back into American life.  Paris was an artifact, a mental map. . . a memory.  We were back to the daily grind.  The factory whistle was blowing.  We were in Trumpland once again.

After the long trip home, my hips and back haven't been the same.
Posted by cafe selavy at 7:15 AM